To the starting line

As the building restoration nears completion, the installation of Skinner Opus 708 is cued up for installation 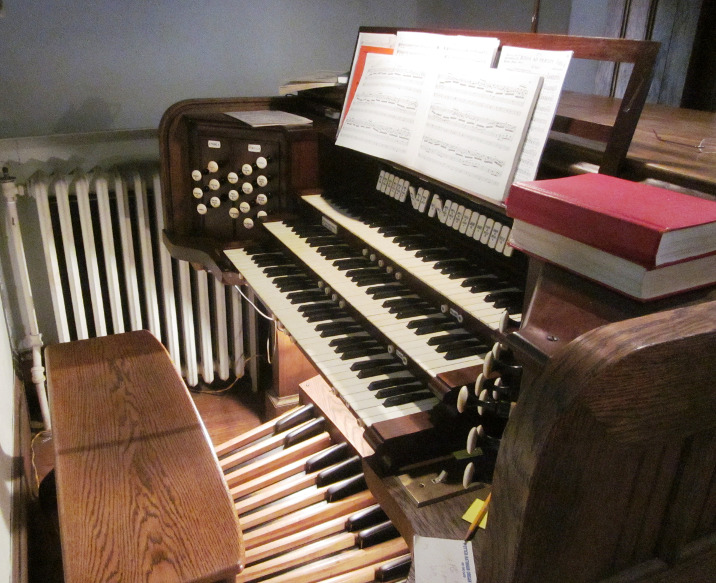 Console of E.M. Skinner, Opus 708, before its removal to Ashmont from the First United Methodist Church, North Adams, Massachusetts

High resolution files of images used in this article - and a few bonus images as well. Thirteen (13) images... click any image to enlarge.

The focus of phase II is the construction of a small, two-story addition to the cloister wing and parish house to accommodate an elevator and a reconfigured stair hall. In addition this phase will see full fire protection extended to the church, and enhancements to the heating, electrical, and lighting systems in both the parish house and the church. The failing, 1980s, white laminate sacristy cabinets will be replaced with oak. This work in the sacristy will fulfill former rector Fr. Titus Oates's vision of a graciously sized and appointed sacristy to support the parish's worship. 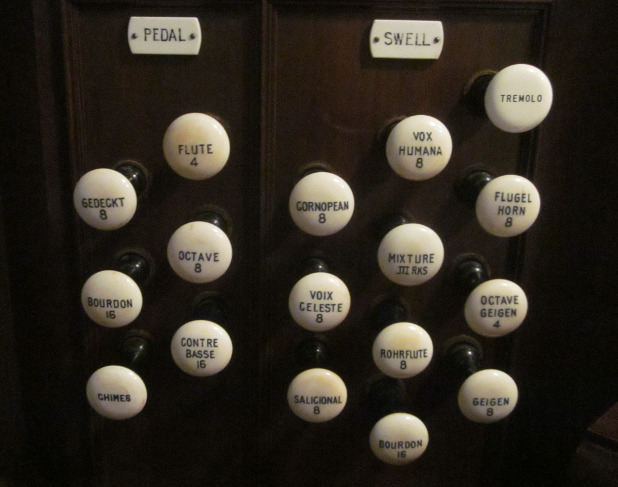 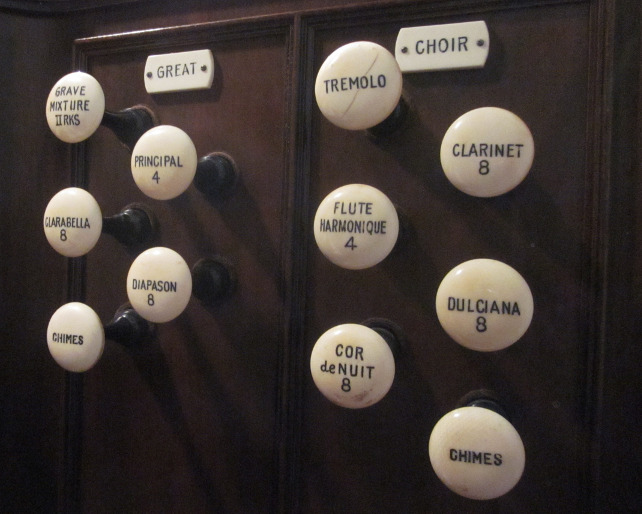 In the midst of planning, however, the Parish was presented with the opportunity of acquiring a vintage 1929 Skinner organ from a closed church in western Massachusetts. Ideal in size, sound and pedigree, Skinner's Opus 708 would offer a fine solution to the chancel organ issue. Thanks to an initial generous gift from a friend of the Parish, All Saints was able to acquire, ship and store the instrument, arranged through consultant and parishioner Jonathan Ambrosino, restorer Joe Sloane, and the able help of many volunteers from the congregation. Though initially planned for a later installation, successful fundraising has permitted the Parish to move forward with the project, such that the Skinner will be installed and playing in 2015.

Skinner organs excel at choral accompaniment, which is critical in leading the Parish's rare Choir of Men and Boys, founded in 1888. Although once common in Roman Catholic and Episcopal churches, fewer than twenty such ensembles remain in America today. In addition to helping to lead the liturgy at All Saints, the Choir provides structured after-school, weekend, and summer programming for urban boys and teenagers. In this safe, positive environment, boys engage in healthy activities alongside musical mentoring and tutelage.

At All Saints, the Skinner will join the Centennial Organ, C.B. Fisk's Opus 103 of 1995, in the rear gallery. From this commanding position, the Fisk leads congregational singing and provides a thrilling instrument for solo literature. This two-organ arrangement finds a particular corollary to The Memorial Church at Harvard, whose 1930 Skinner serves Appleton Chapel for weekday worship, while the 2012 Fisk leads Sunday mornings and offers a superb recital venue.

There are further links between the two institutions. All Saints and Harvard have recently re-invigorated a historical connection in the form of the Archibald T. Davison Fellowship. This program brings a Harvard Glee Club member to All Saints, where he joins in the singing, assists with rehearsals, and serves as a mentor to Ashmont boys and teens. In return, Ashmont boys occasionally sing with the Glee Club and attend their concerts. (A Dorchester native, Davison was Organist and Choirmaster at All Saints from 1906 until 1910, when he left to take the position of University Organist and Choirmaster at Harvard. In 1912 he began coaching Harvard Glee Club members, to whom he became a beloved figure. In 1919 "Doc" Davison accepted the Glee Club's invitation to become the ensemble's first conductor.)

Last spring, the Joseph G. Bradley Foundation awarded All Saints a $55,000 one-to-one challenge grant to help close the remaining $110,000 gap to fully fund the Skinner project. In addition to the $465,000 already given towards the Skinner, All Saints has raised just over $20,000 towards the Bradley challenge. Therefore, every donation given at Prof. Porter's 21 September 2014 recital will be matched one-to-one by the Bradley Foundation, up to a total of $35,000. 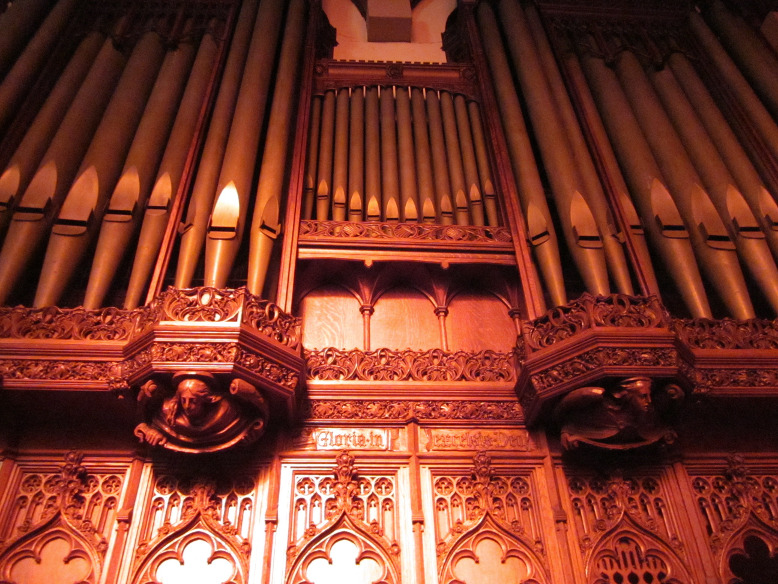 Chancel case work and non-speaking facade pipes. The Skinner organ will be installed in the organ chamber behind this case work on the project east side of the chancel. 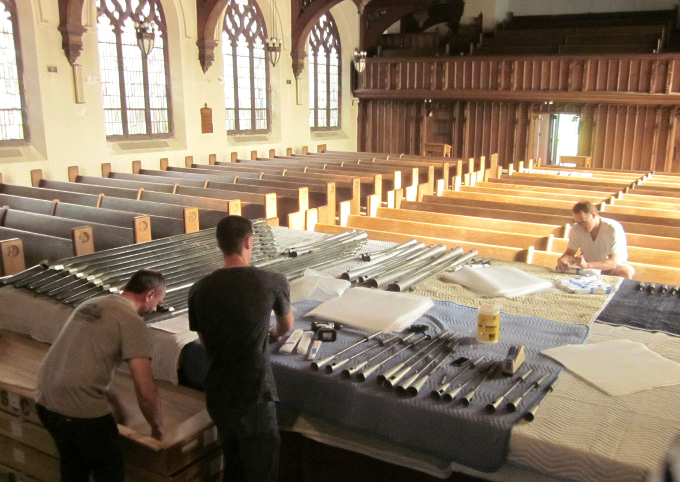 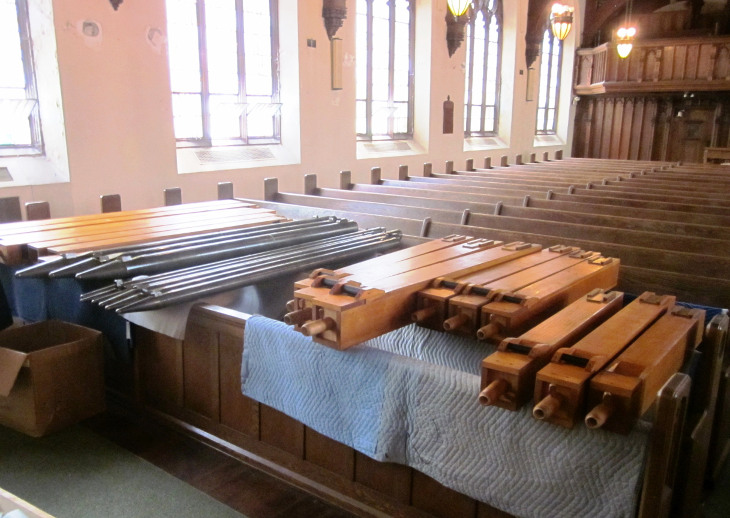 Removed pipes ready to be boxed