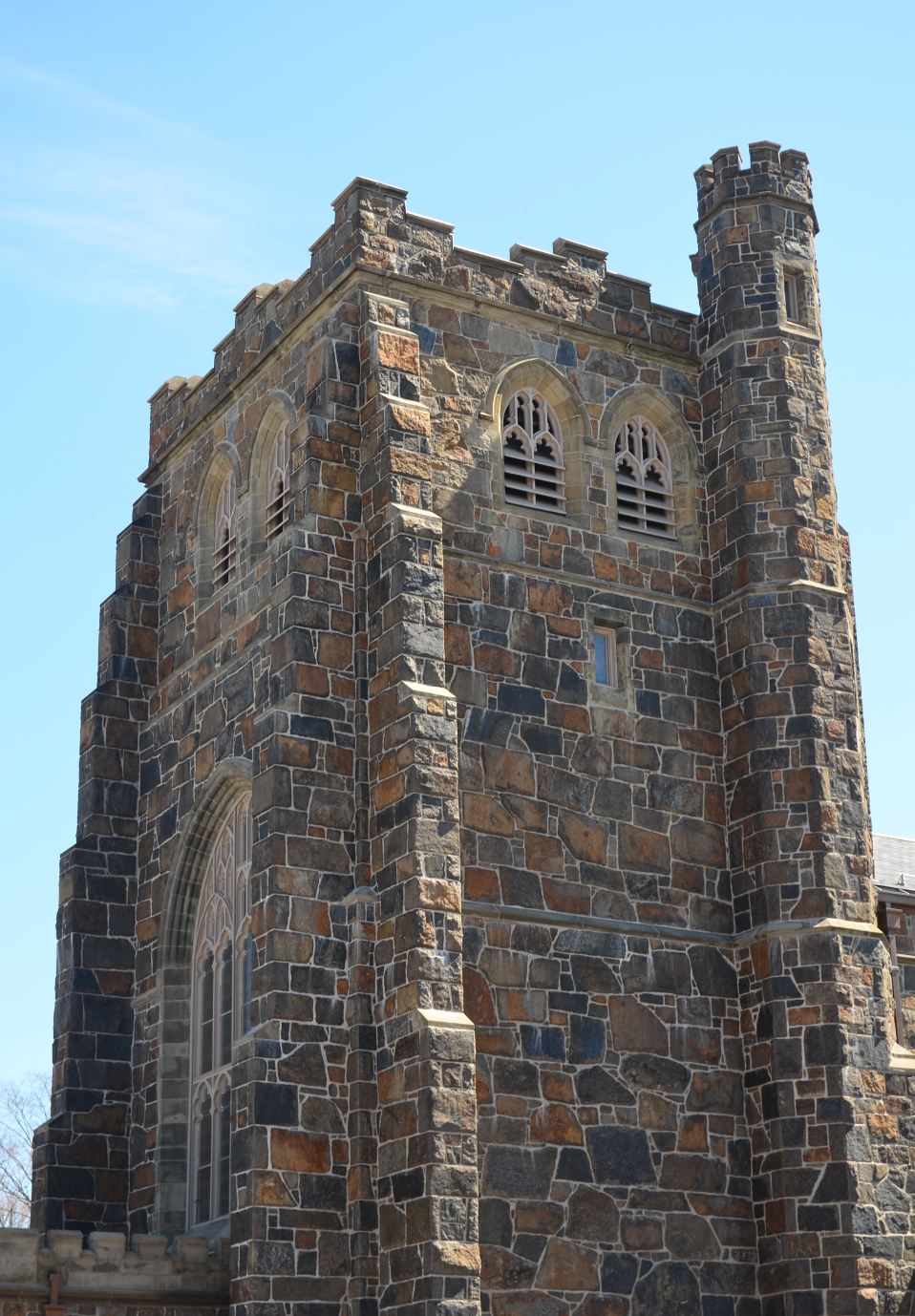 All Saints' tower from the NW in a noontime light in March. The tower is a memorial to Oliver White Peabody's brothers, Everett and William Bourn Oliver. Notice the crenelated roof of the circular stair at the right of the photograph.

All of the slate on the chancel roof, the high roof of the nave, and the aisle roofs has been replaced. Spot repairs have been made to the slate of the parish house. All of the copper work—standing- and flat-seamed roofs, gutters, rain leaders, buttress caps, roof ridges, and flashing—has been replaced. 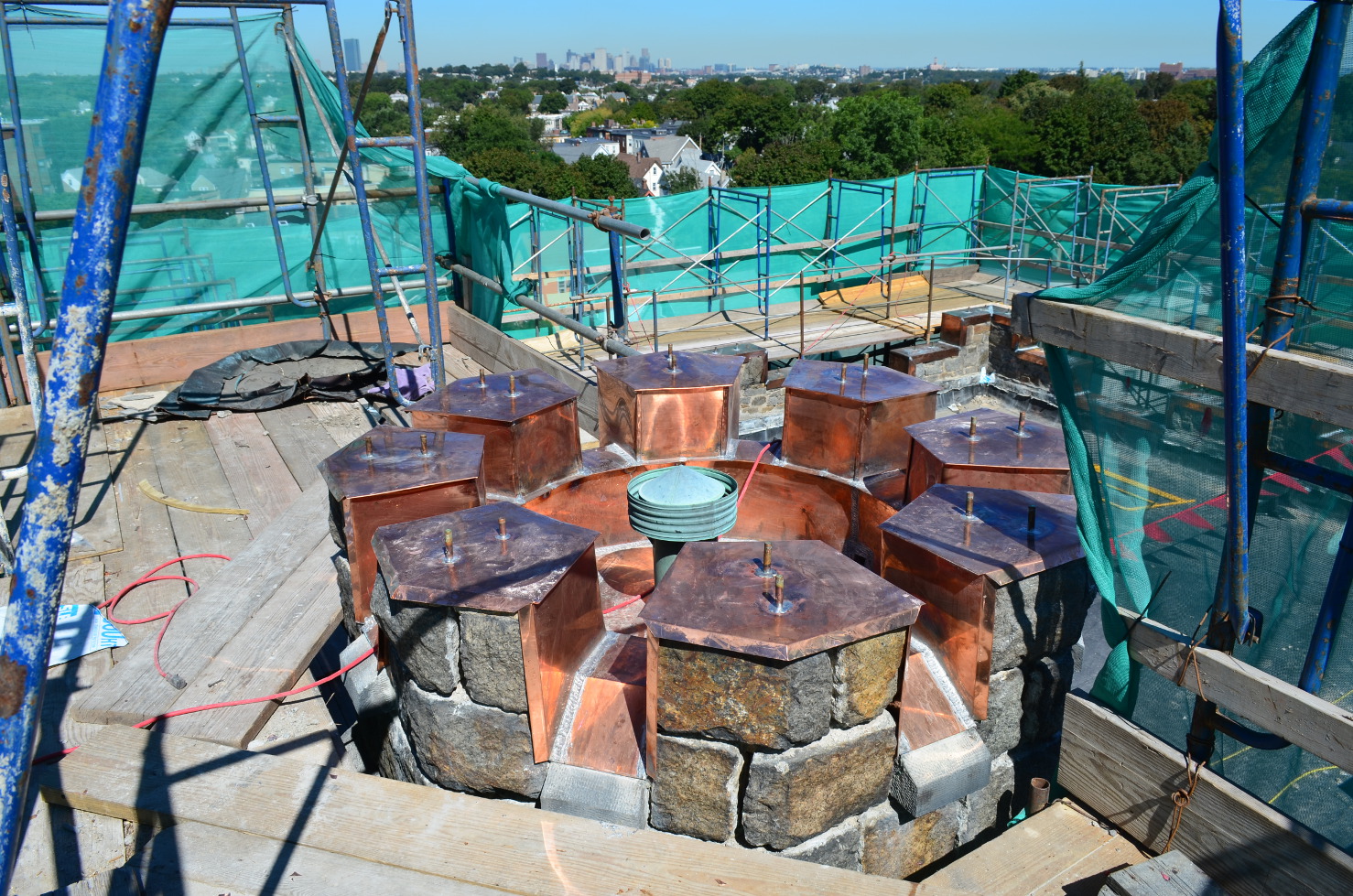 The completed sheet metal work at the roof of the stair to the All Saints' tower roof. The coping stones have not yet been set onto their copper-sheathed pins. Notice the re-used original ventilation cover as well as the Boston skyline in the distance. The old mortar has been raked from between the Quincy granite blocks, but the new mortar has not yet been applied. 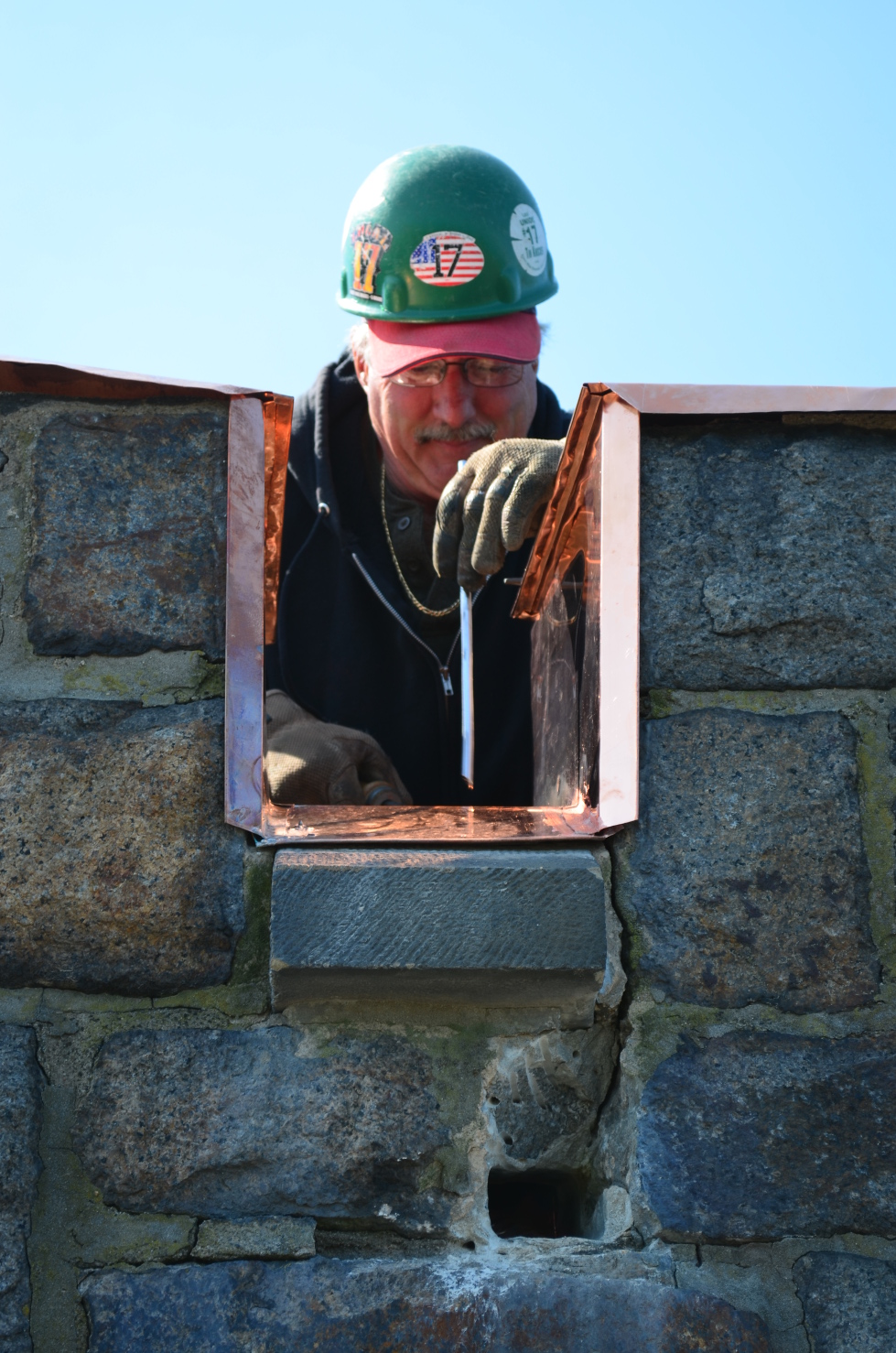 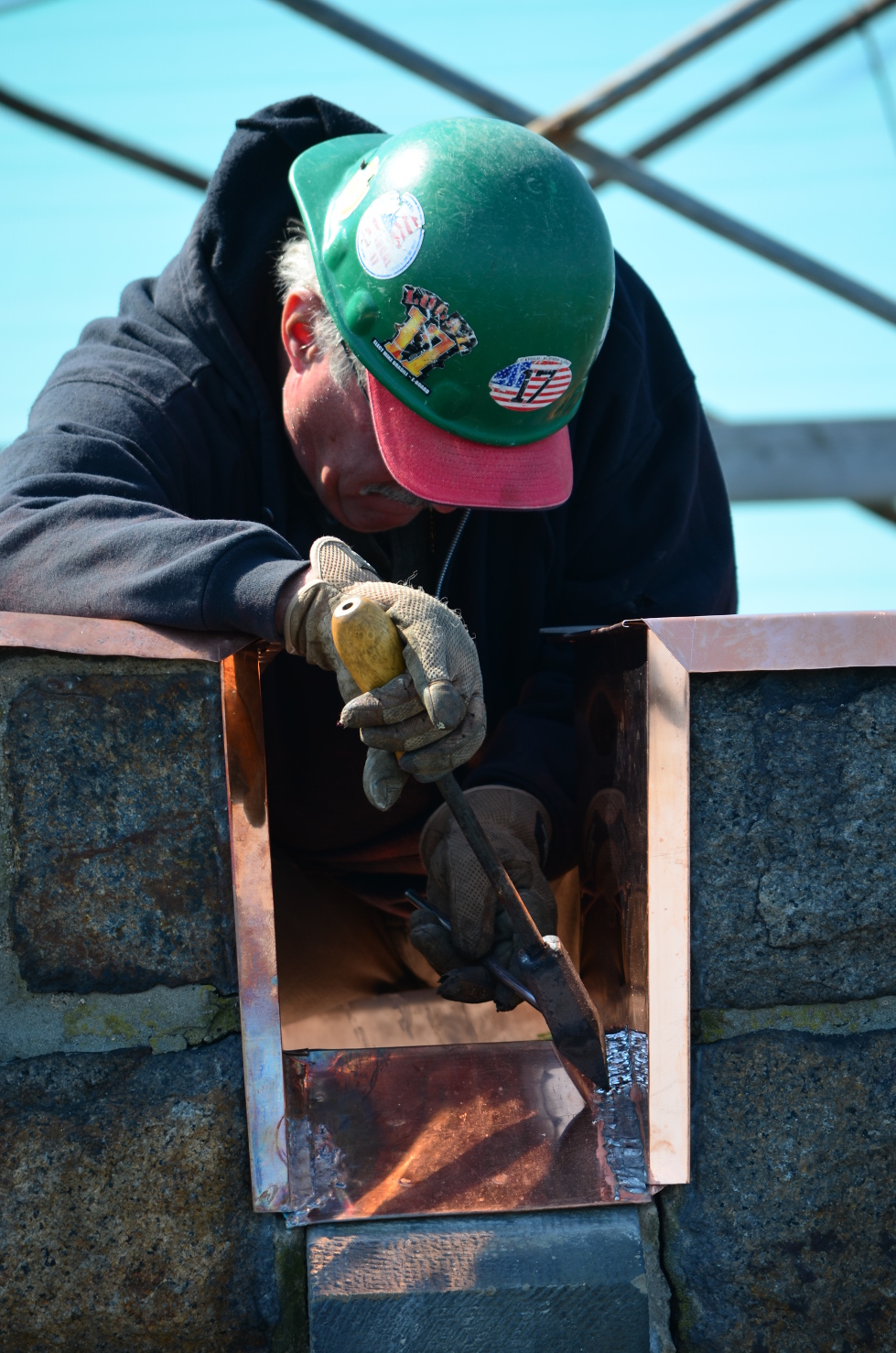 A Gilbert and Becker sheet-metal worker solders a join. In the photograph on the left, notice the hole in the masonry ready for the drain for this small, but complicated roof. The old mortar on this side has not yet been raked out. 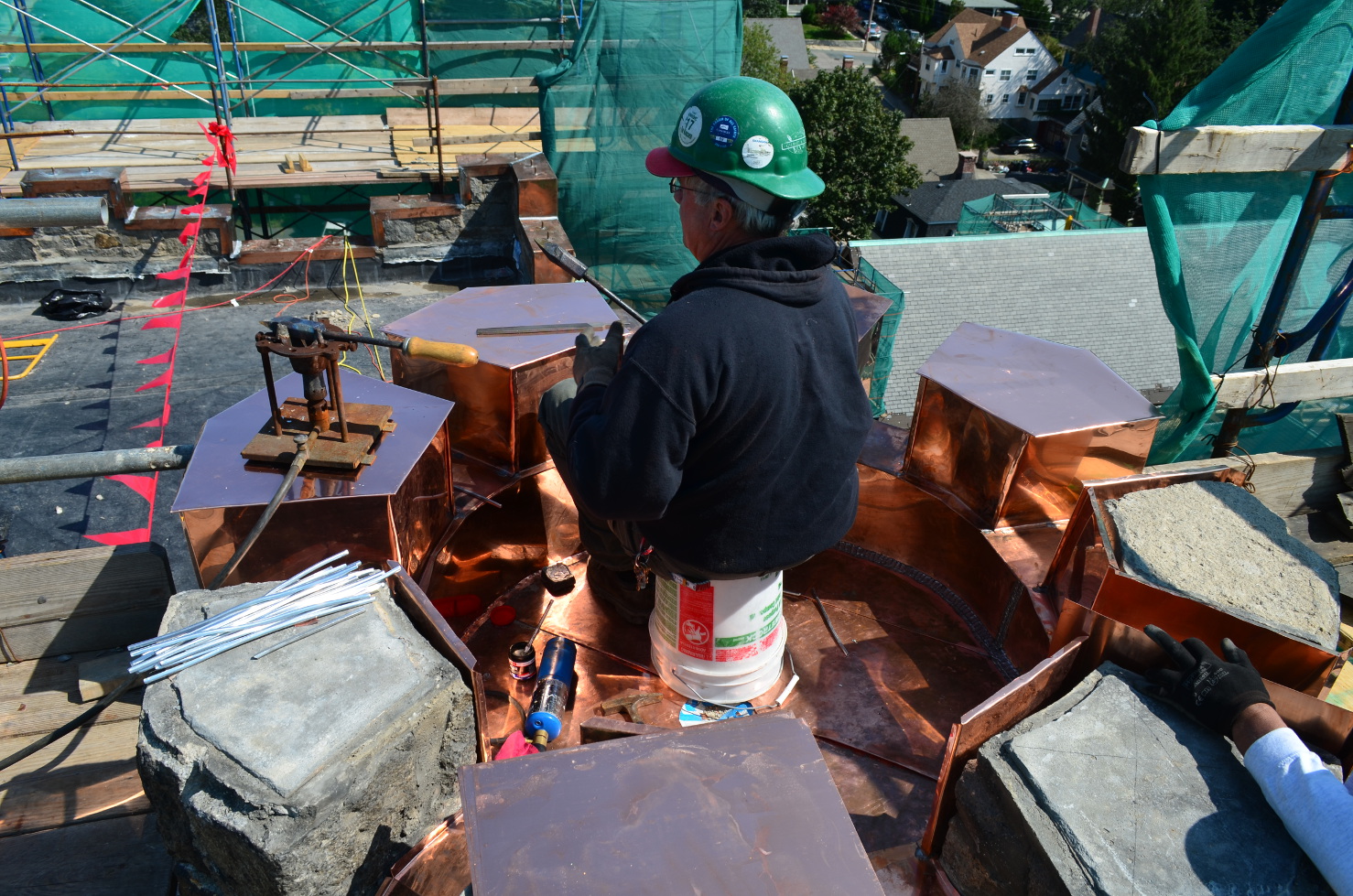 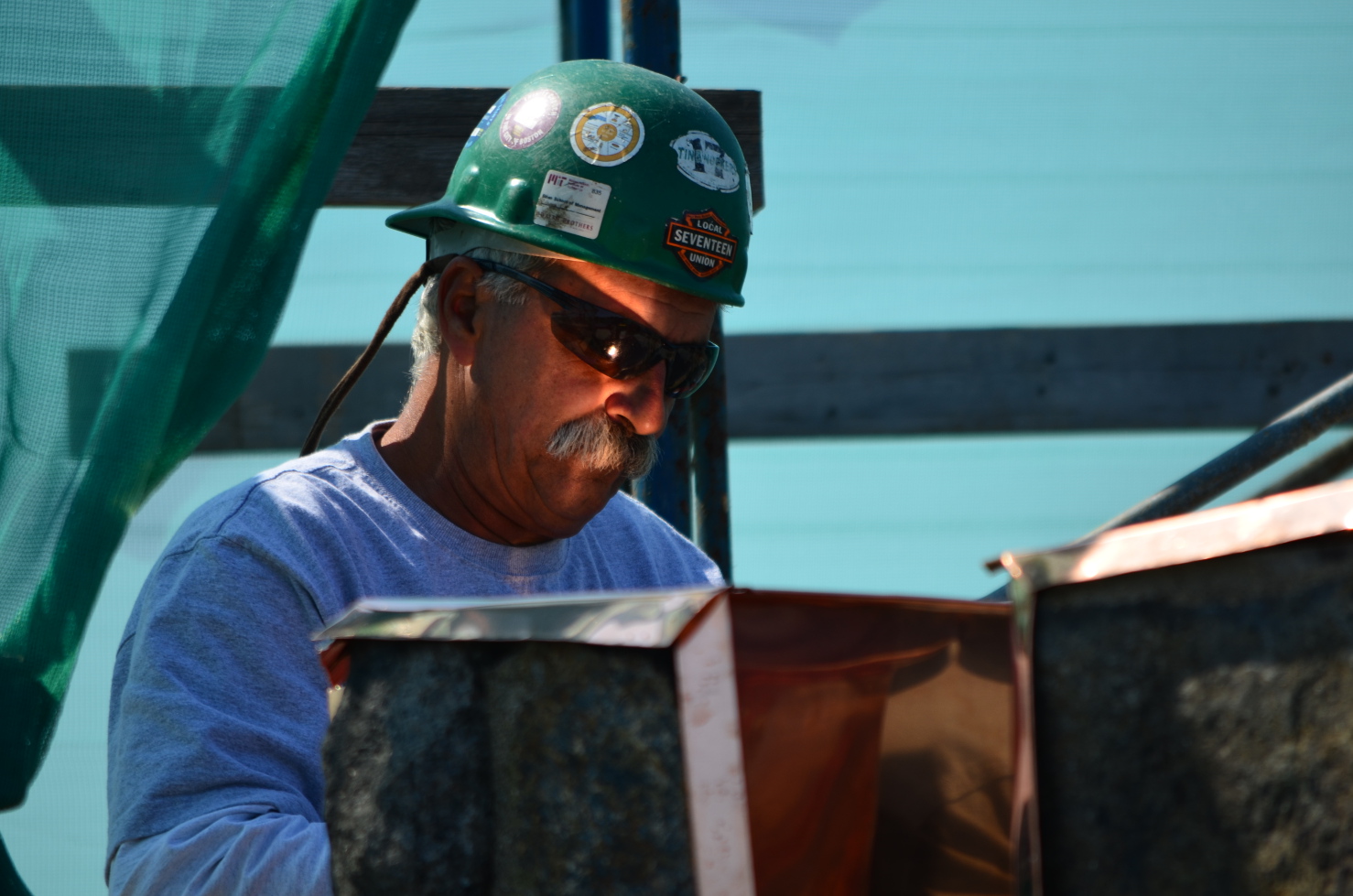 The photograph on the left shows four merlons flashed and four to go. On the right, the setting sun is reflected on the face of a worker as he cuts copper to fit against the four remaining merlons.

The masonry of the entire church has been repointed and cleaned. Dutchman repairs have been made to a few selected portions of the sandstone trim. A gracious ADA-compliant ramp has been built from the West Door (geographic north) parallel to Ashmont Street, connecting to a walkway that runs south from the landing to the sidewalk grade.

All of the slate on the chancel roof, the high roof of the nave, and the aisle roofs has been replaced. Spot repairs have been made to the slate of the parish house. All of the copper work—standing- and flat-seamed roofs, gutters, rain leaders, buttress caps, roof ridges, and flashing—has been replaced. 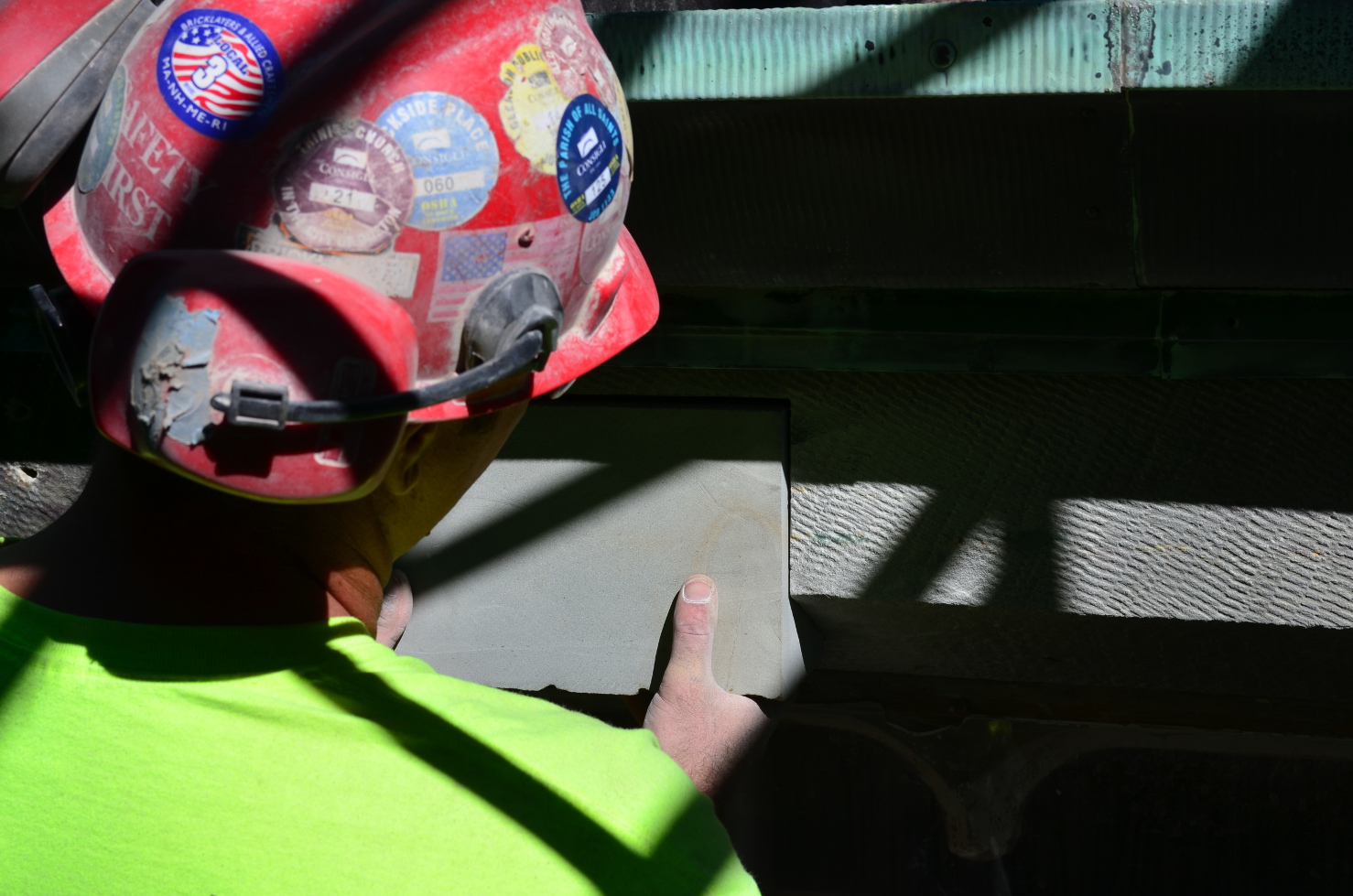 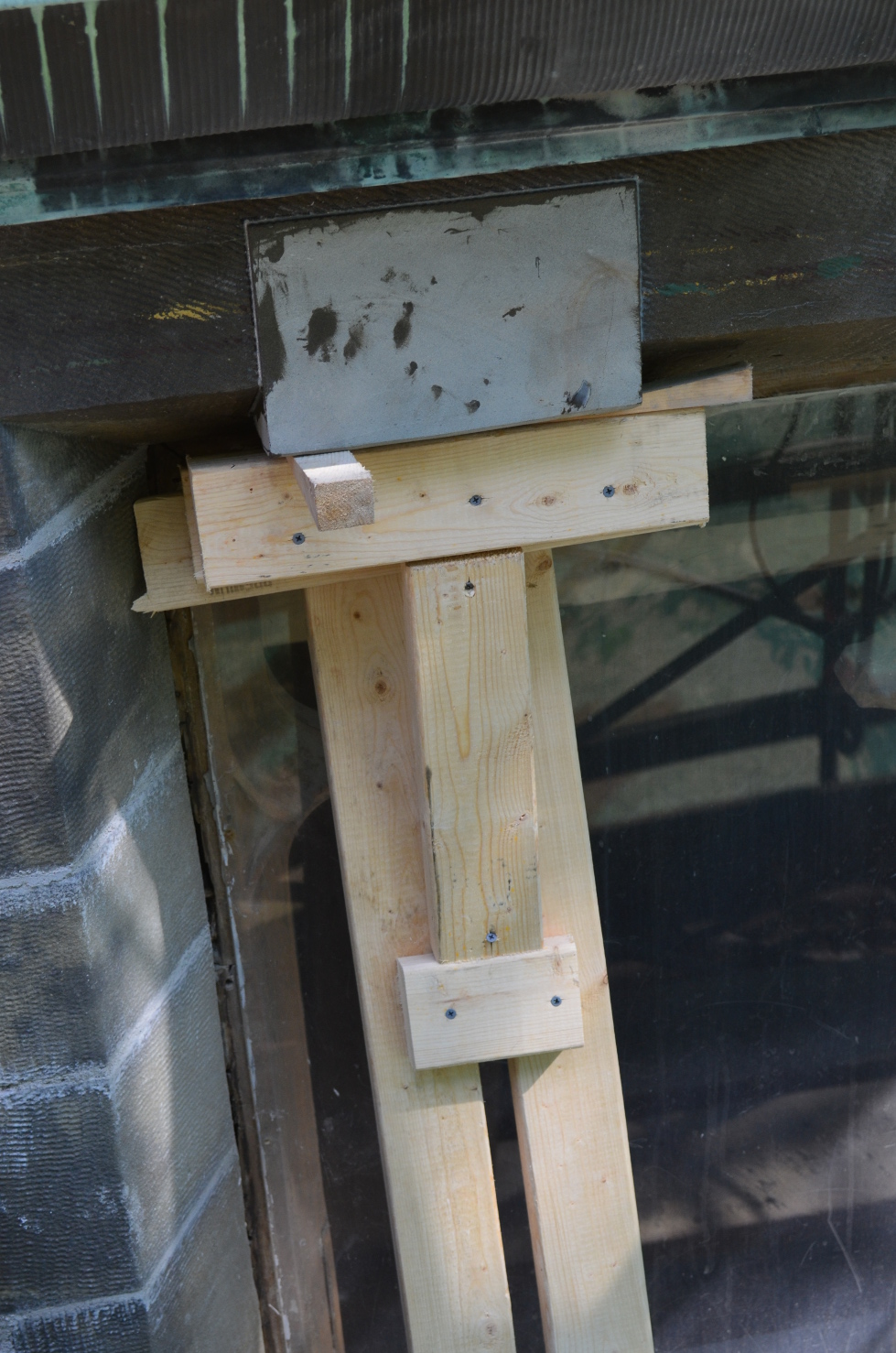 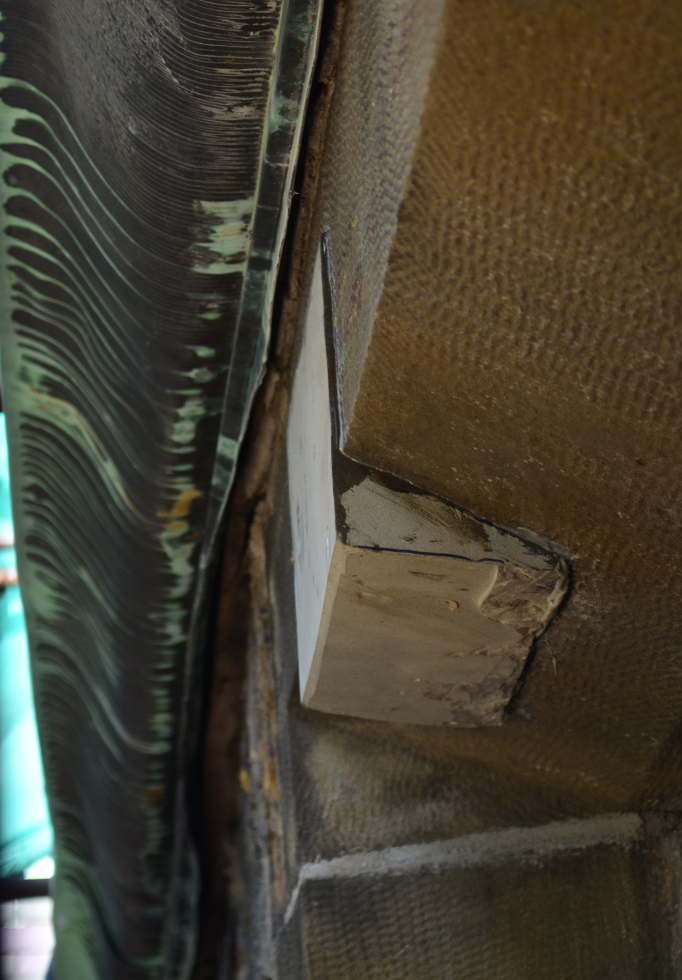 The photograph on the left shows the dutchman braced in place. On the right, the repair before being trimmed and tooled to match the surrounding stone. Notice the failed gutter above the repair. 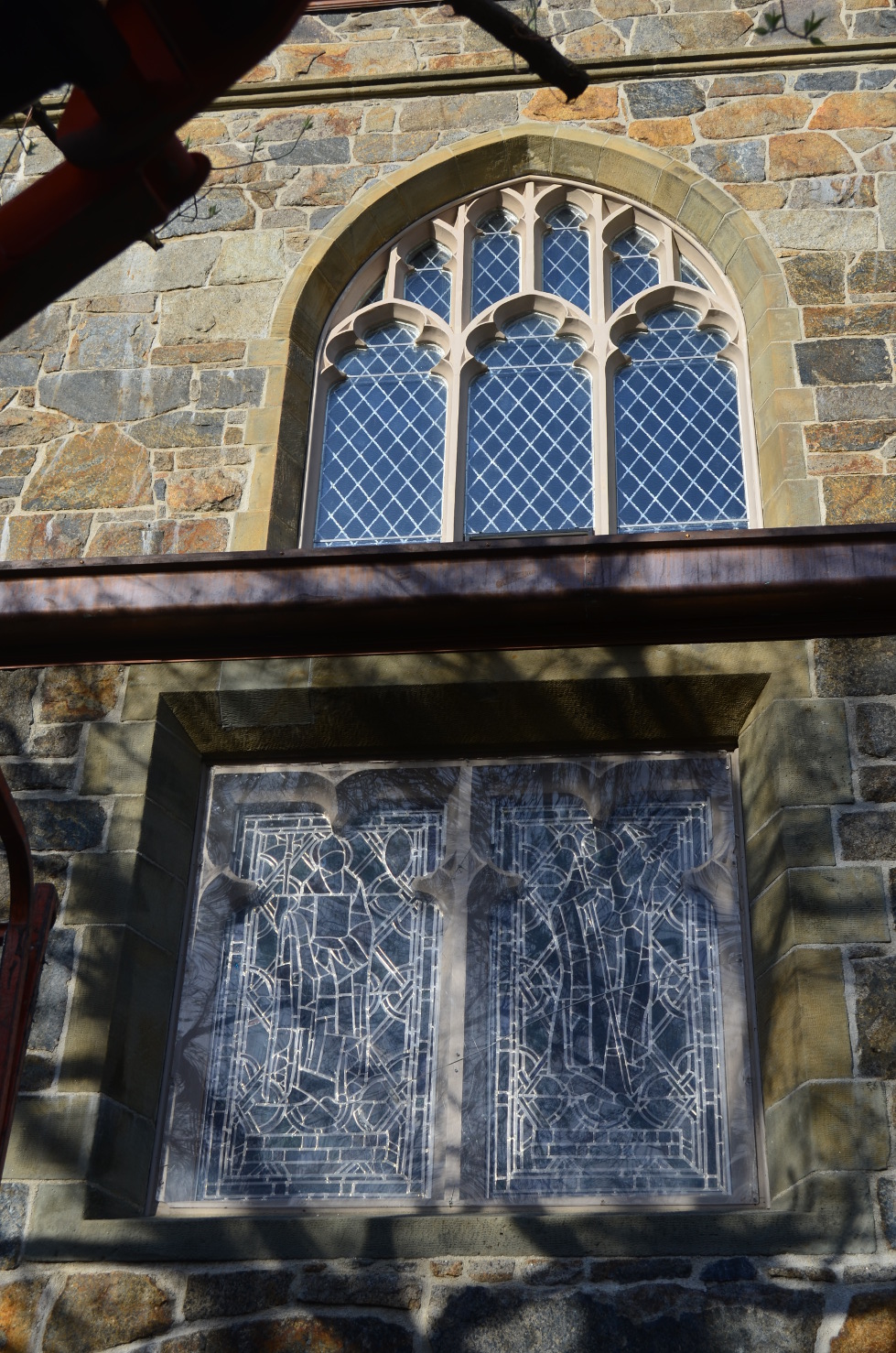 Clerestory window W203 and aisle window W107 amidst the shadows of a dogwood and an orange 65-foot lift. Click (twice) on the photograph to see greater detail. The completed dutchman repair to the window surround of W107 can be seen at the upper right of the surround.

The diamond quarry (also called, cathedral glass) in the church's clerestory—considered temporary glazing by the builders—has all been removed, unzipped, cleaned, releaded, and largely reinstalled. New protective glazing has been installed into tracery throughout the clerestory to replace the Lexan sheets that were placed over the tracery in the last third of the 20th century. The figural glass in the aisle windows has removed and restored like the clerestory cathedral glass, with the addition that broken pieces that cannot be mended have been replaced with newly painted glass.

The frames for all the windows in the church have been repaired. The tracery for the clerestory was in terrible condition and has been fully restored using like-species dutchman repairs where possible and Honduran mahogany where complete members required replacement. The final caulking and painting of the tracery awaits warm spring weather. 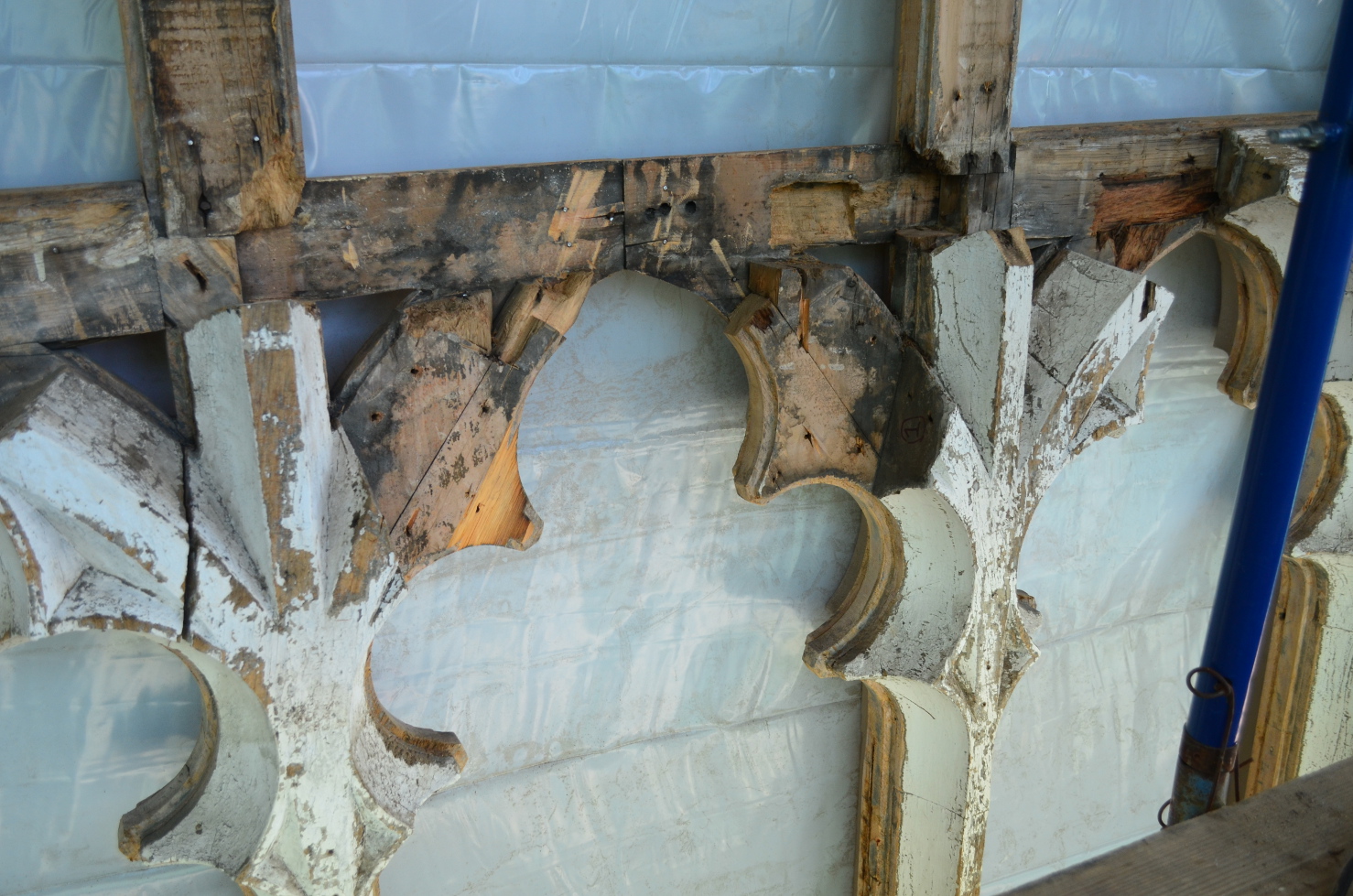 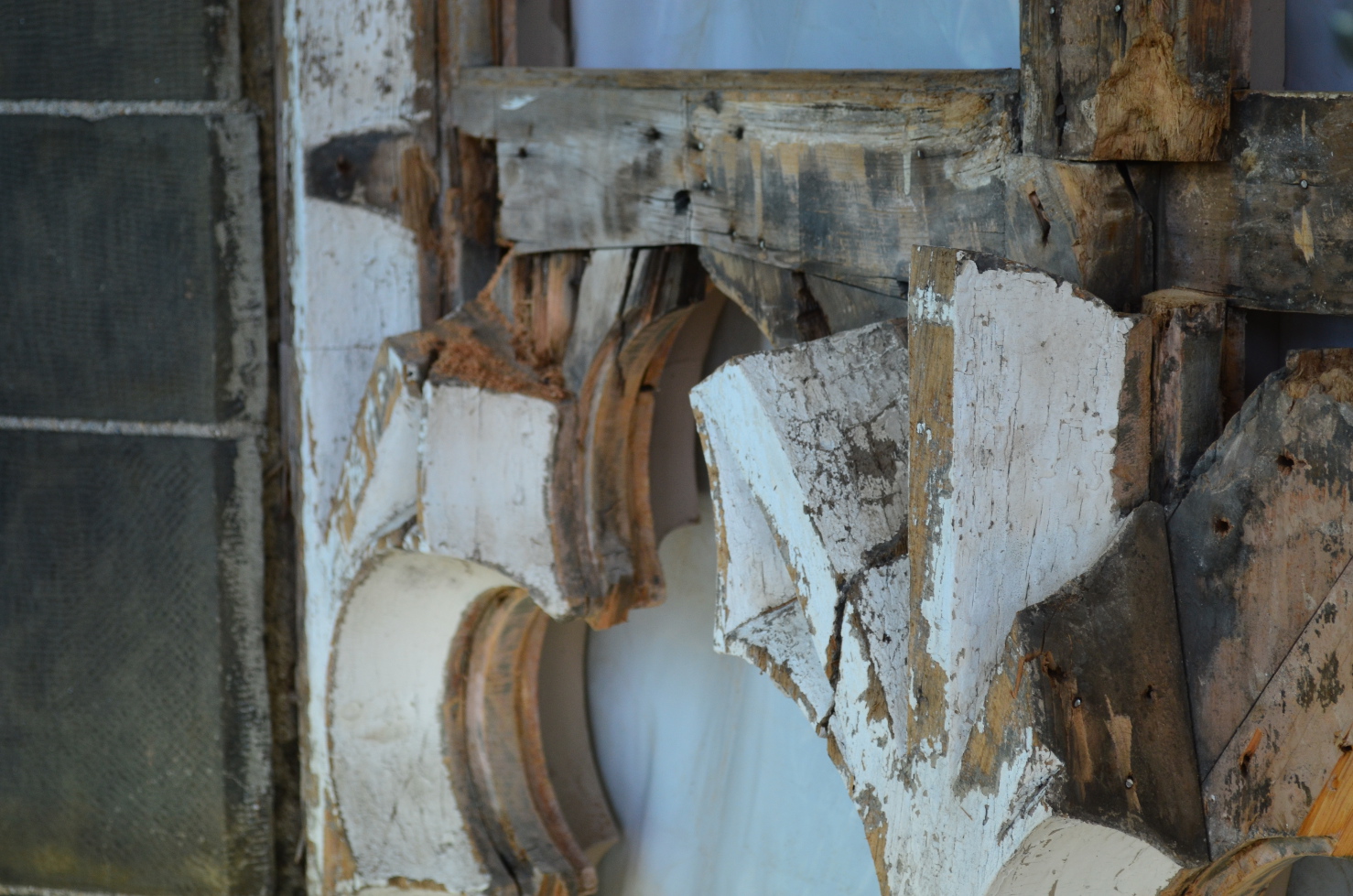 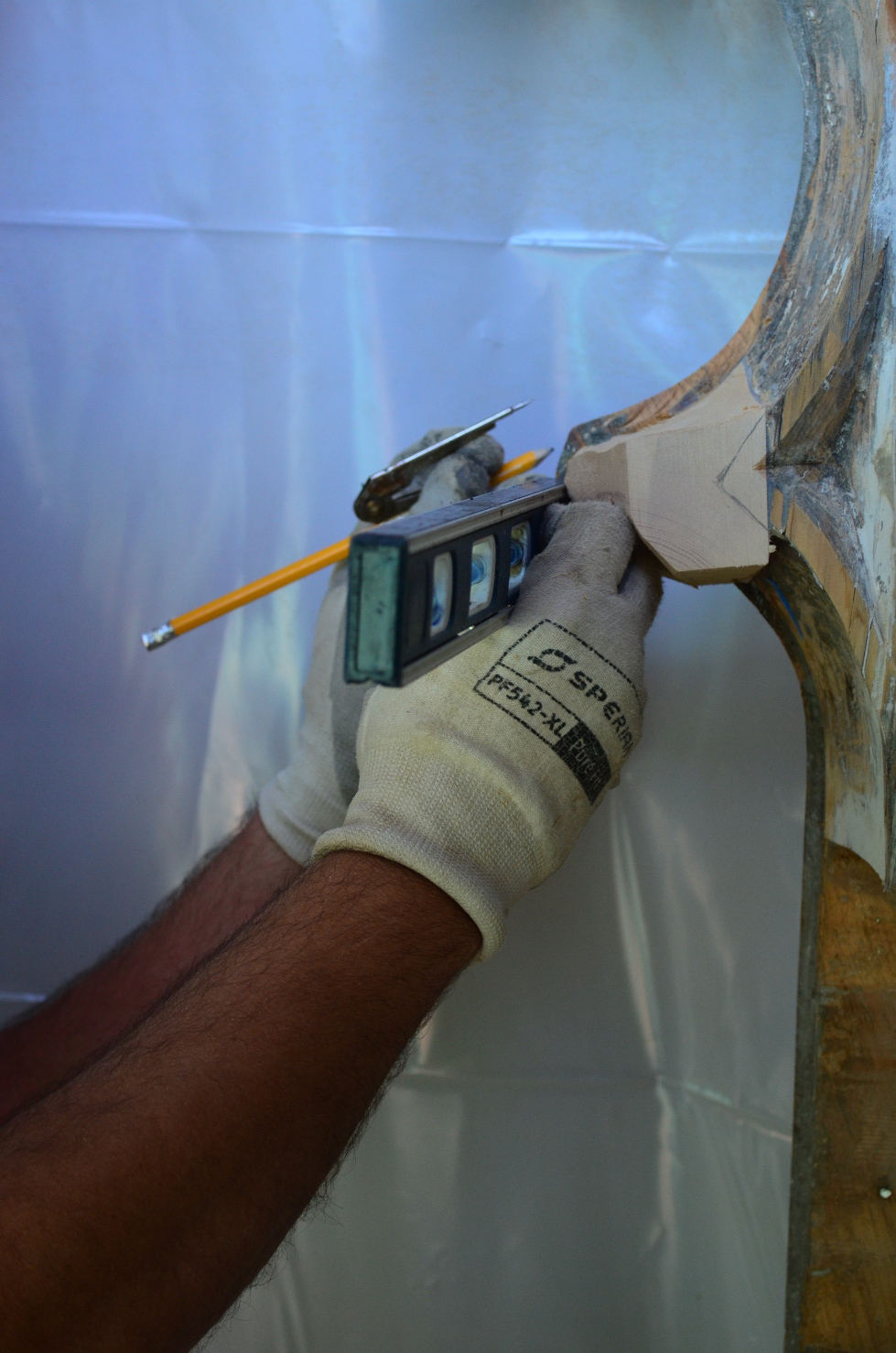 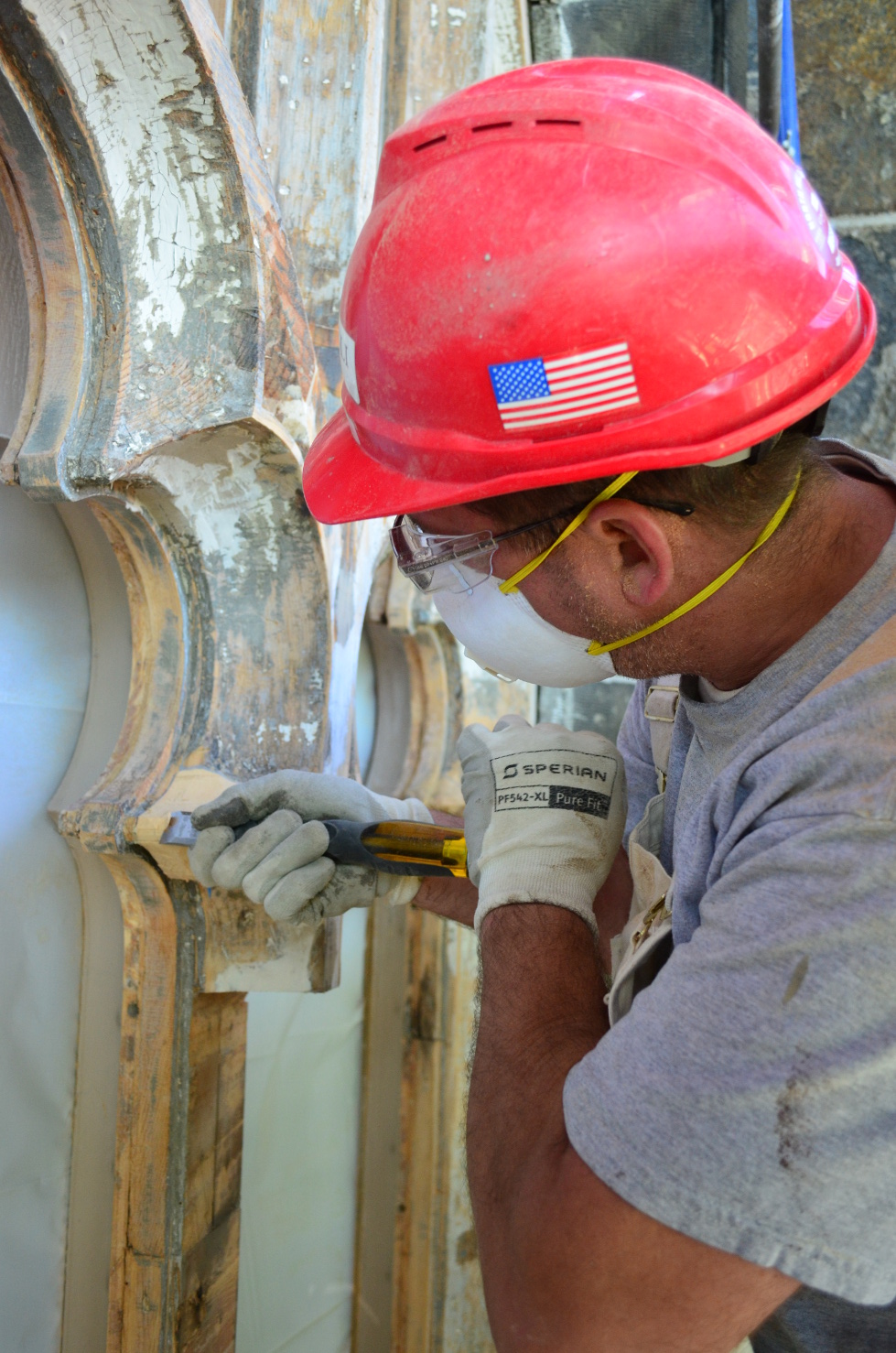 The photograph on the left shows a rough block of old-growth white pine ready to be fashioned. On the right, a Consigli carpenter chisels that block into shape. 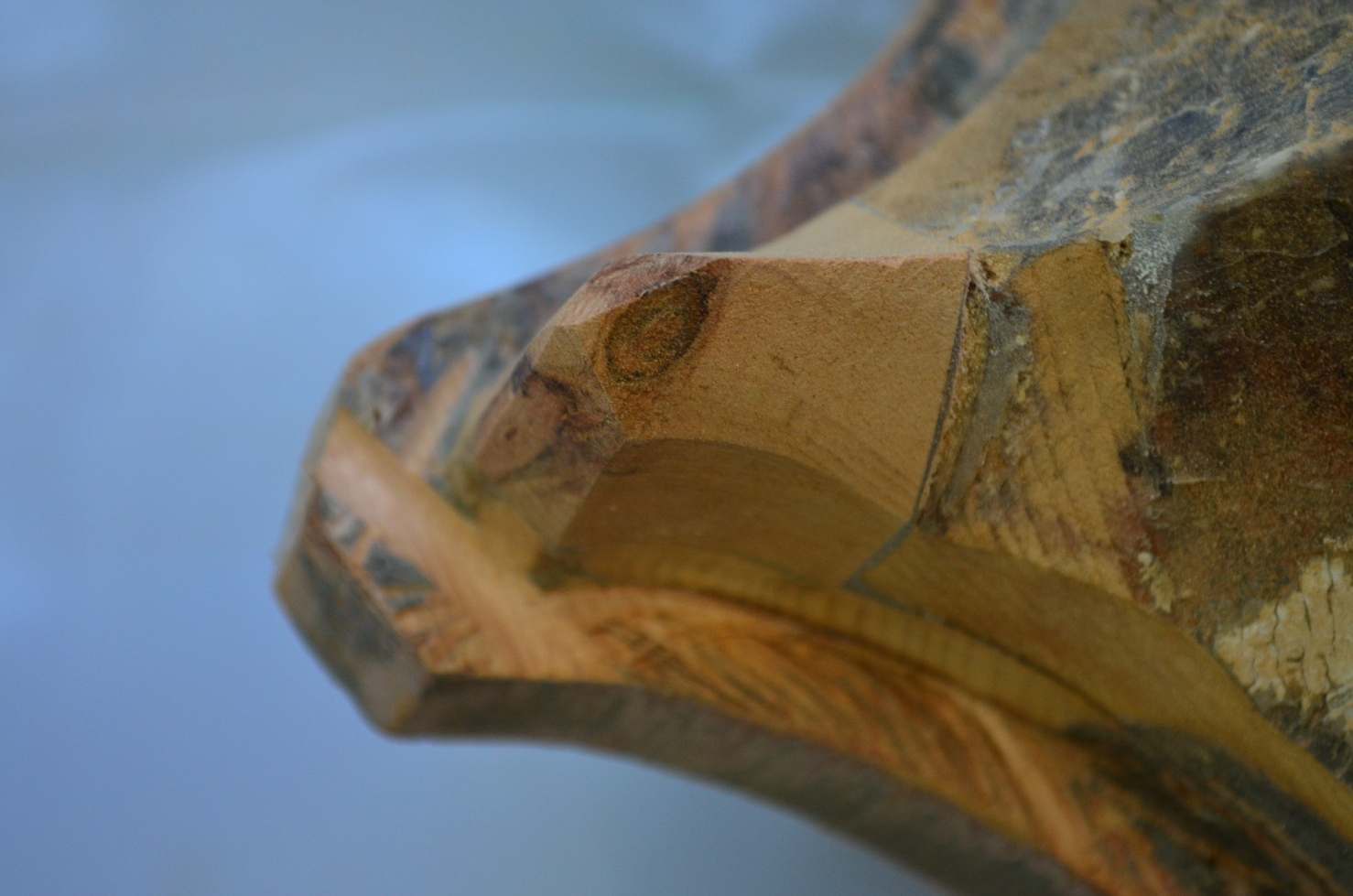 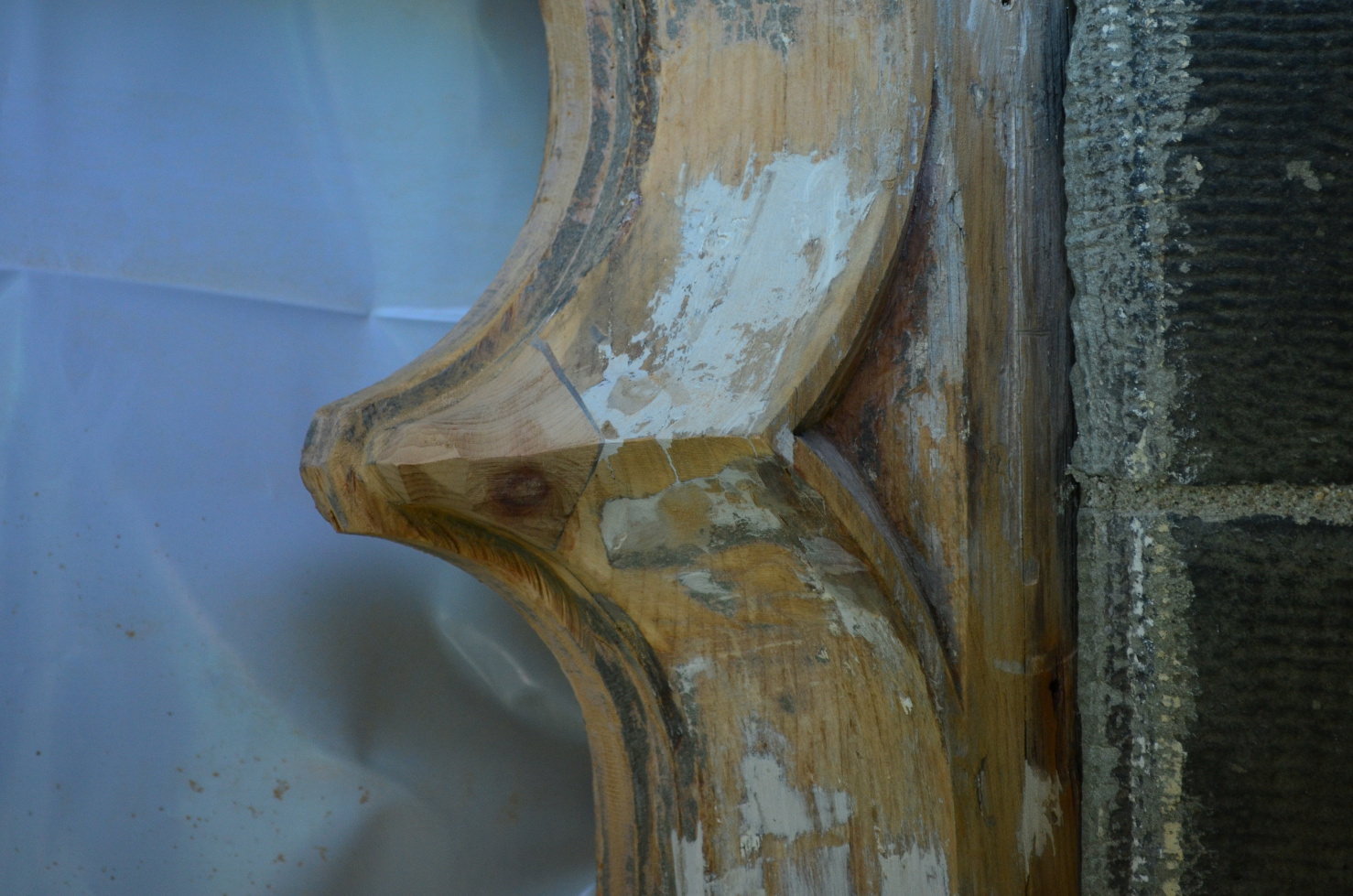 Two views of the repaired nose. 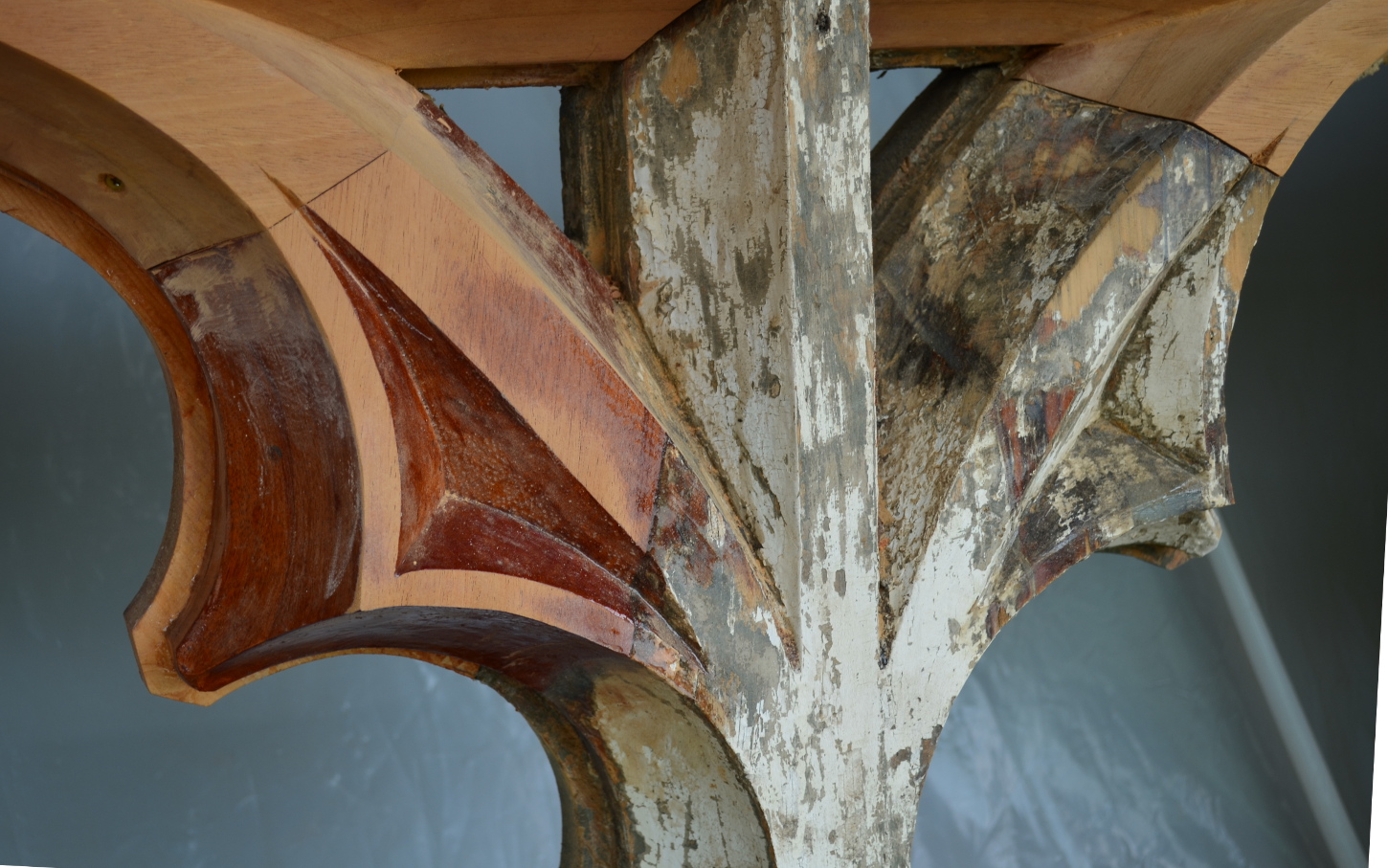 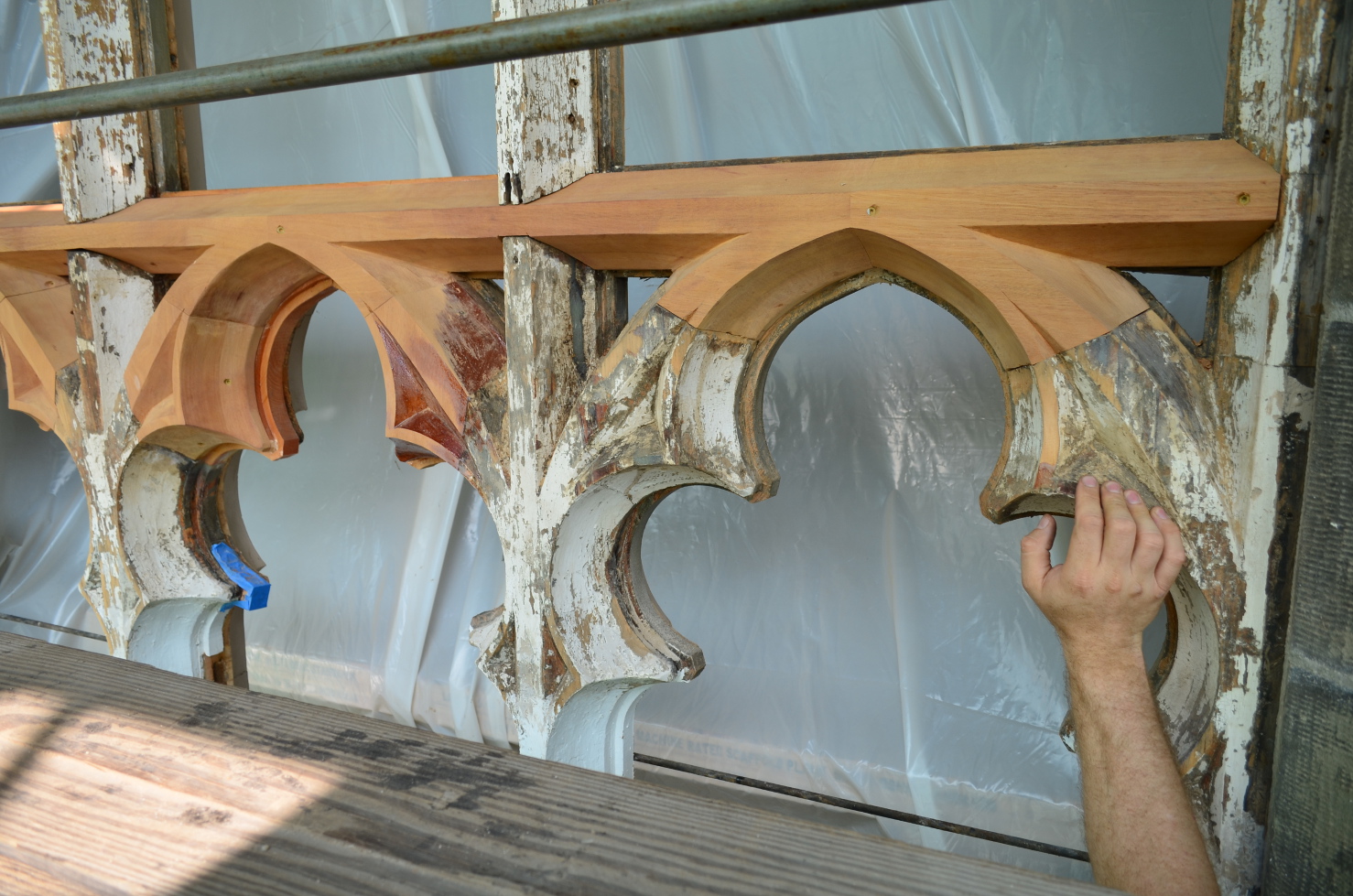 Two views of mahogany replacement members in the clerestory tracery. 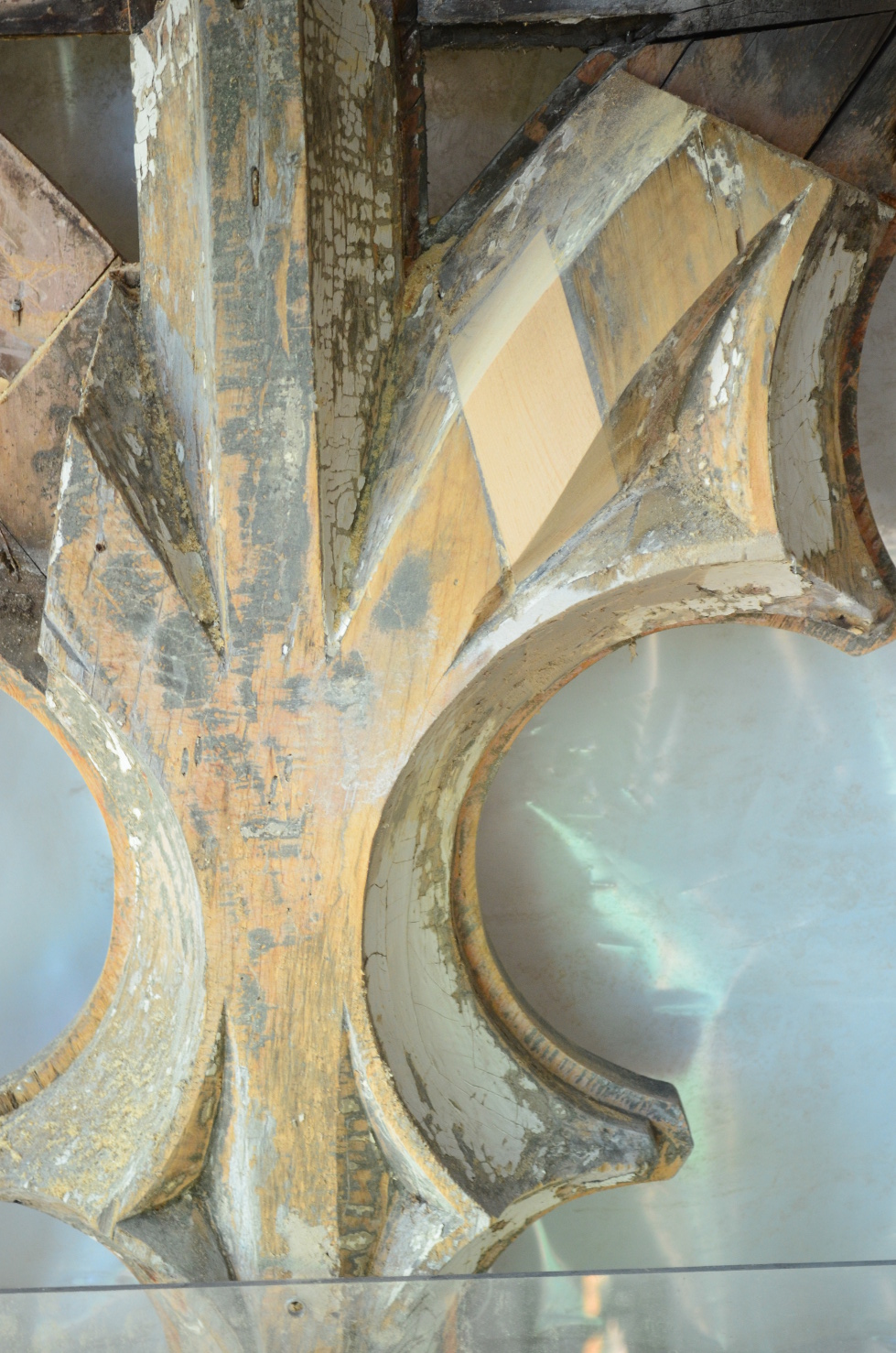 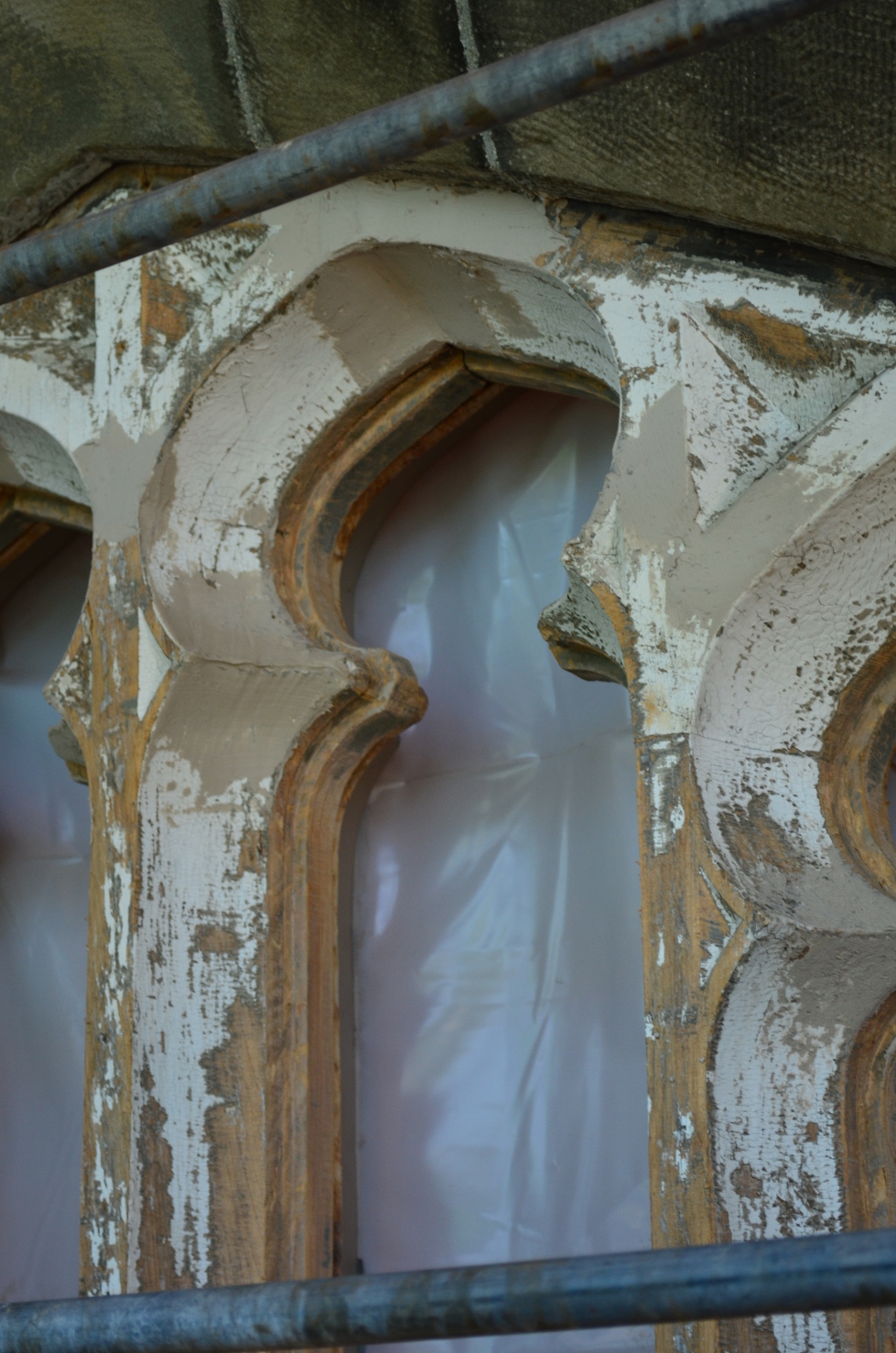 Close-up of another like-species dutchman repair on the left. On the right, a close-up of plastic repair at the head of a lancet. 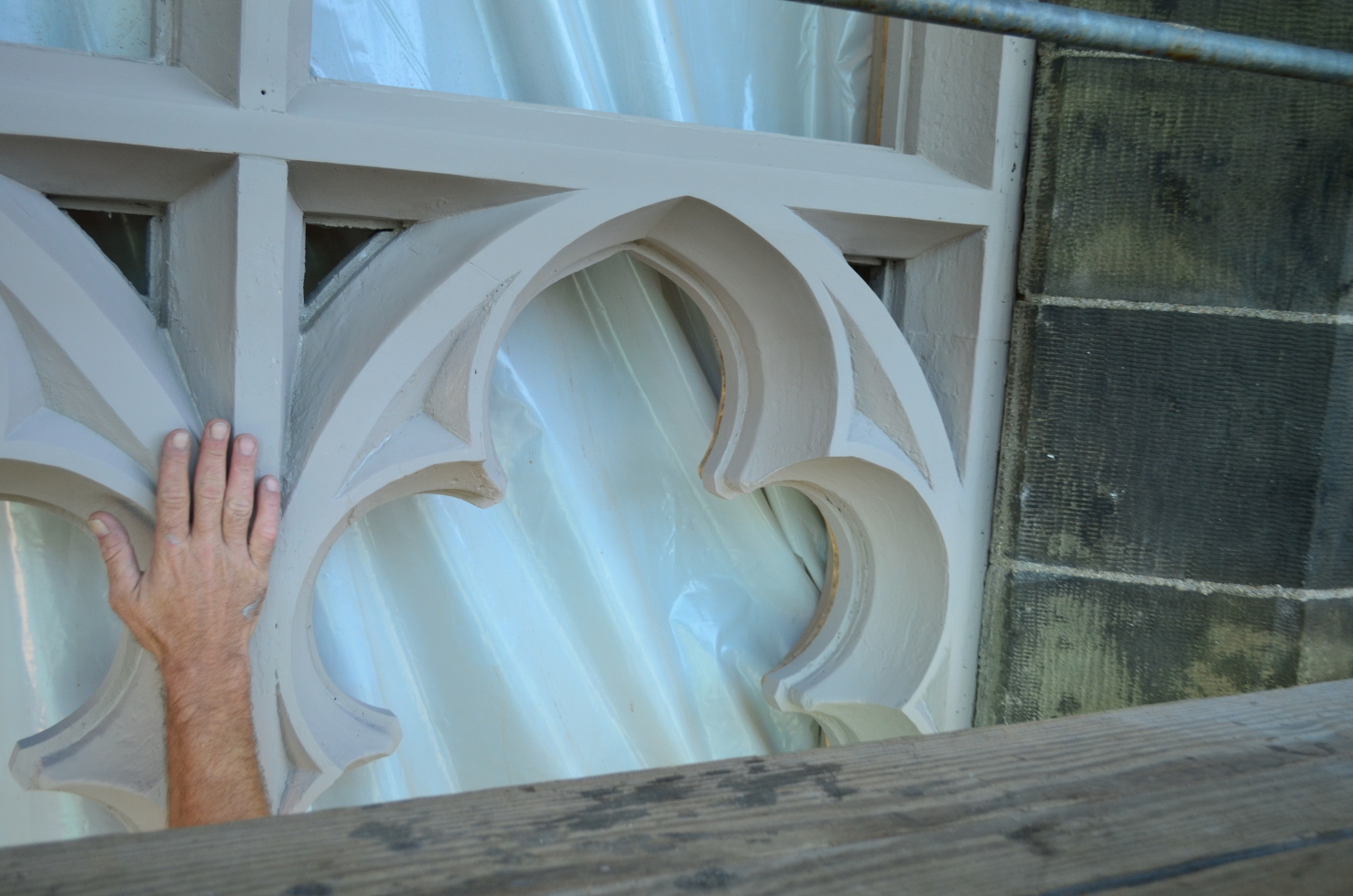 Inspecting clerestory tracery after painting and prior to installation of protective glazing.

All of the leaded glass windows have been rebuilt for the parish house and in the hyphen connecting the parish house to the church (termed the cloister hall by generations of parishioners). Their installation also awaits warmer weather. The leaded glass was manufactured by the Lyn Hovey Studio in Guatemala. All of the wooden window frames have either been restored or rebuilt. The metal casement frame have all been restored.

A new code-compliant stair to the gymnasium replaces the old stair.