The last major stained glass window to be restored is the 1896 Adoration by Kings and Shepherds by Harry Eldredge Goodhue and manufactured in the studio of the firm Phipps, Slocum & Co. Like the architects' window, it constructed of layered or "plated" opalescent glass. 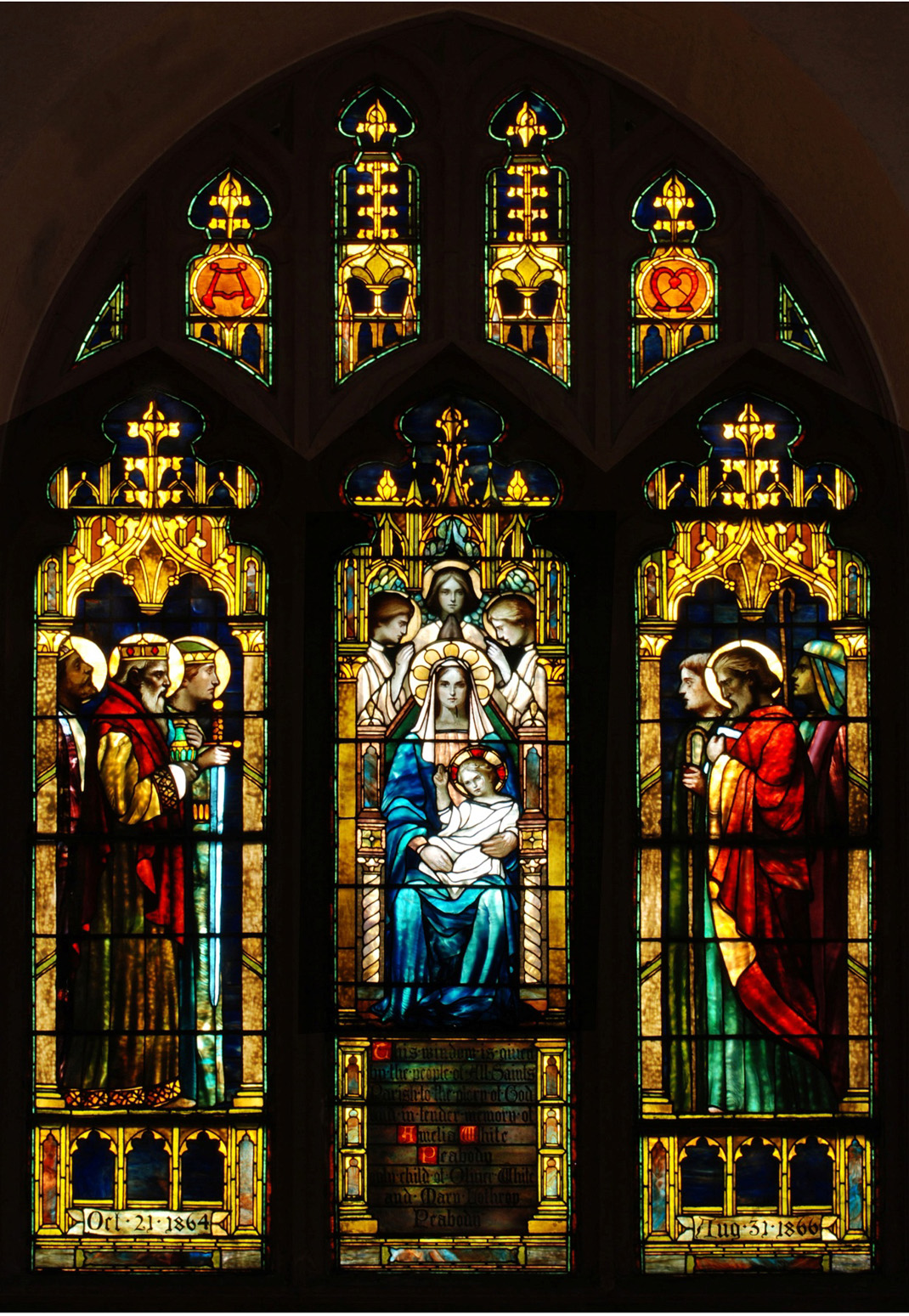 Prerestoration transmitted light photograph of the Harry Eldredge Goodhue Adoration window in the west side of the first bay of All Saints' Ashmont.

Images used in this article. Click any image to enlarge.

Different to antique and cathedral glass in the rest of the church, opalescent glass is "characterized by a milky opacity." In this window, paint is used only on the flesh and inscriptions. Jewels are used to embellish the hems and sleeves of the kings' robes, and drapery glass is used for clothing. Some jewels are made by pressing molten glass into smooth or faceted steel molds. Other jewels are faceted with hammers.

Detail of the left lancet showing kings adoring the Christ Child in reflected light. Notice the jeweled haft of the sword in the beardless king's hand, the jeweled urn held by the central king, and the two lozenge-shaped jewels in his crown

The window was originally planned to occupy the opening above the altar, although within a year of its completion, Cram and Mrs. Peabody were planning a large altar reredos to cover that window opening. 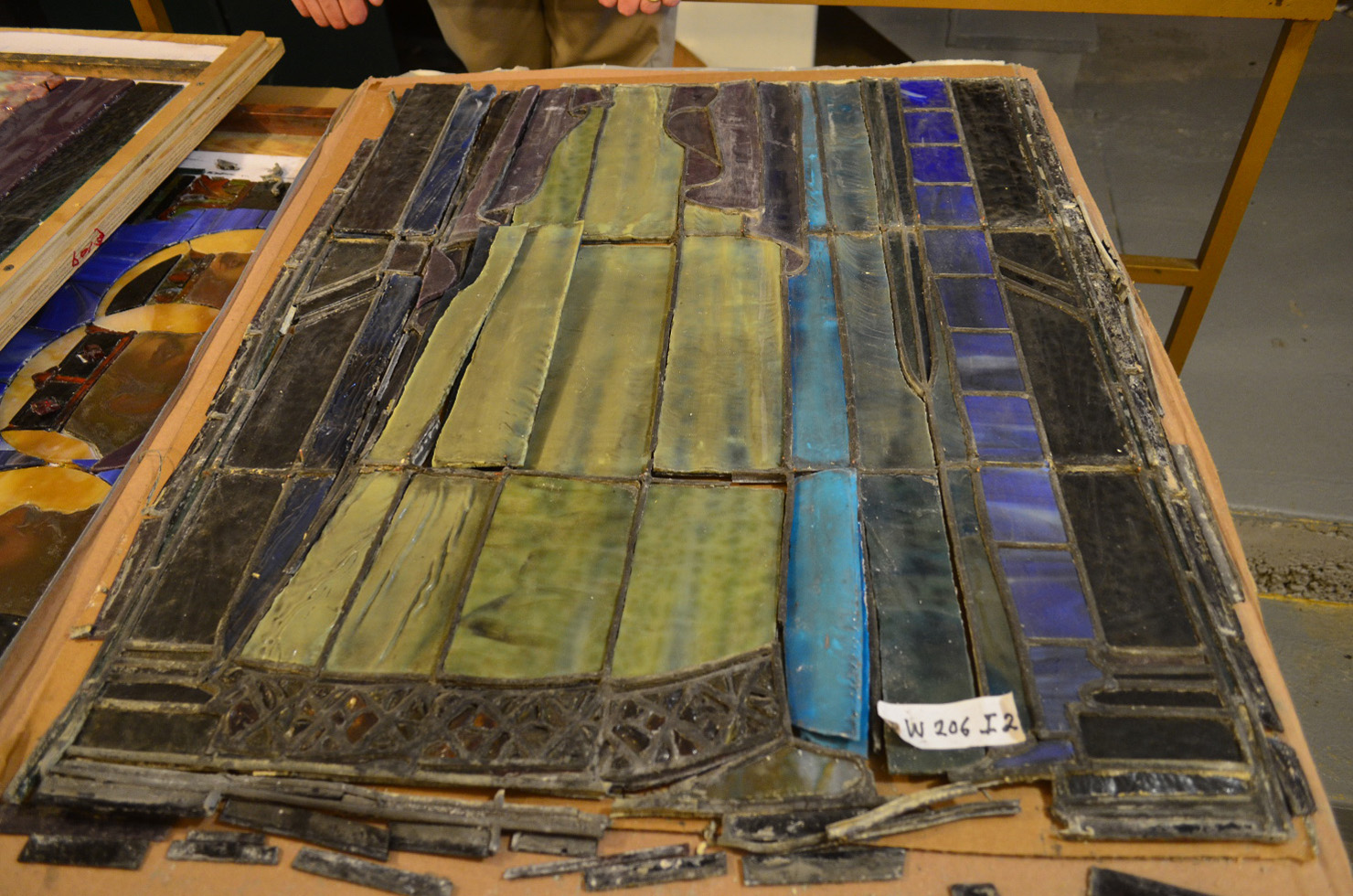 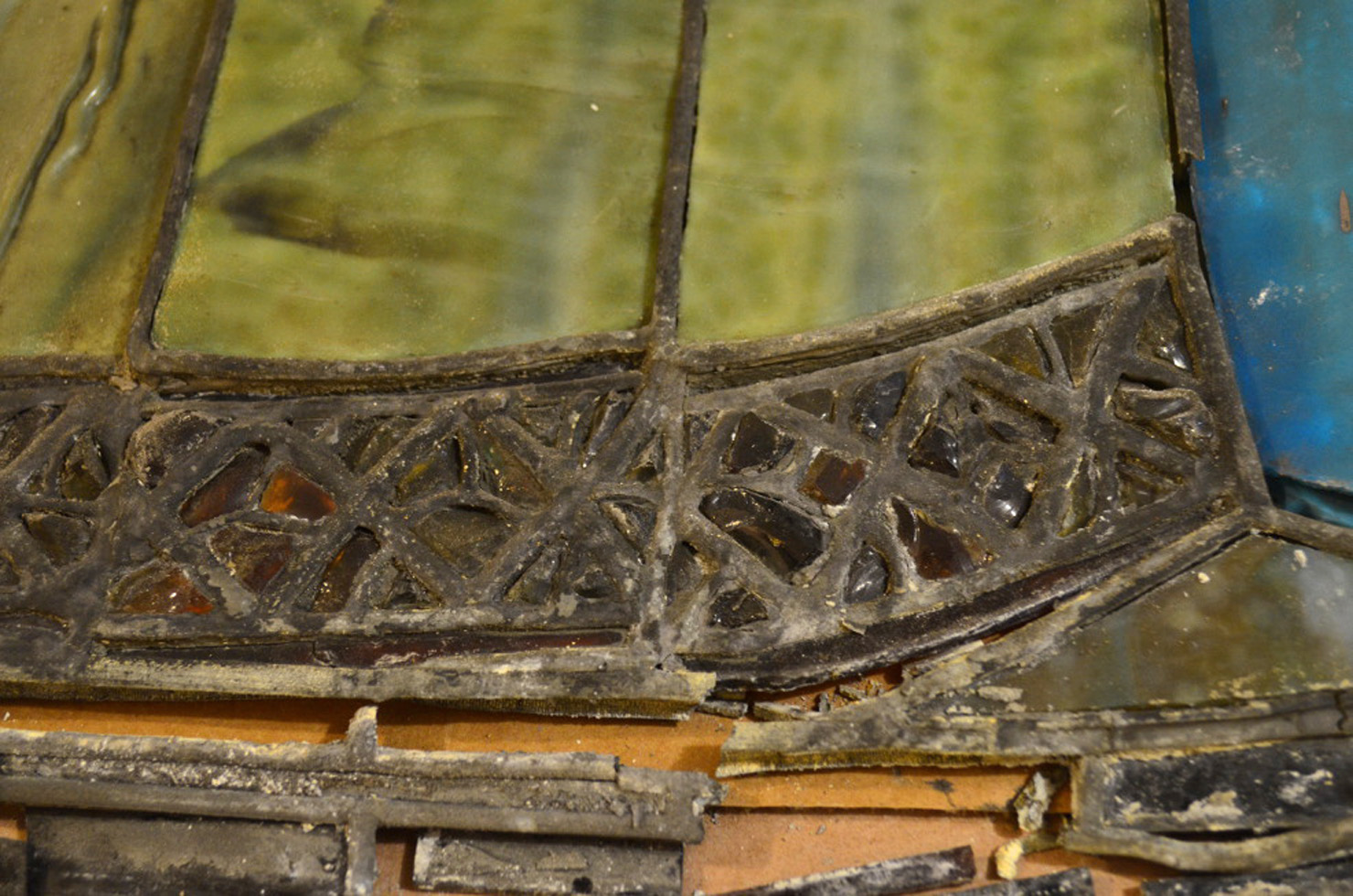 King's robe and bottom hem on the left with a closer detail of the jeweled hem on the right. Compare the reflected-light color of the robe here with the color in the photograph of the full window in transmitted light

John LaFarge began using opalescent glass in layers in the late 1870s and Louis Comfort Tiffany is widely known for producing windows with this glass. At the turn of the last century, the rift between those favoring use of opalescent glass and those who opposed it caused bitter divisions in the congregations commissioning new windows and among the artists producing them. Cram came to detest opalescent glass and this window's artist was working exclusively in antique and cathedral glass by the time of his death. 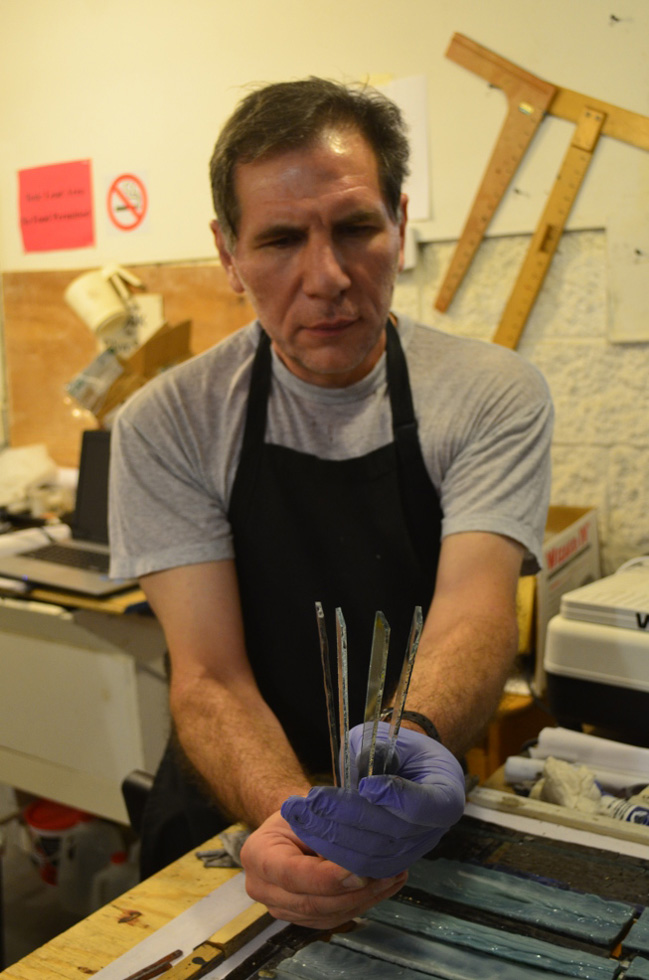 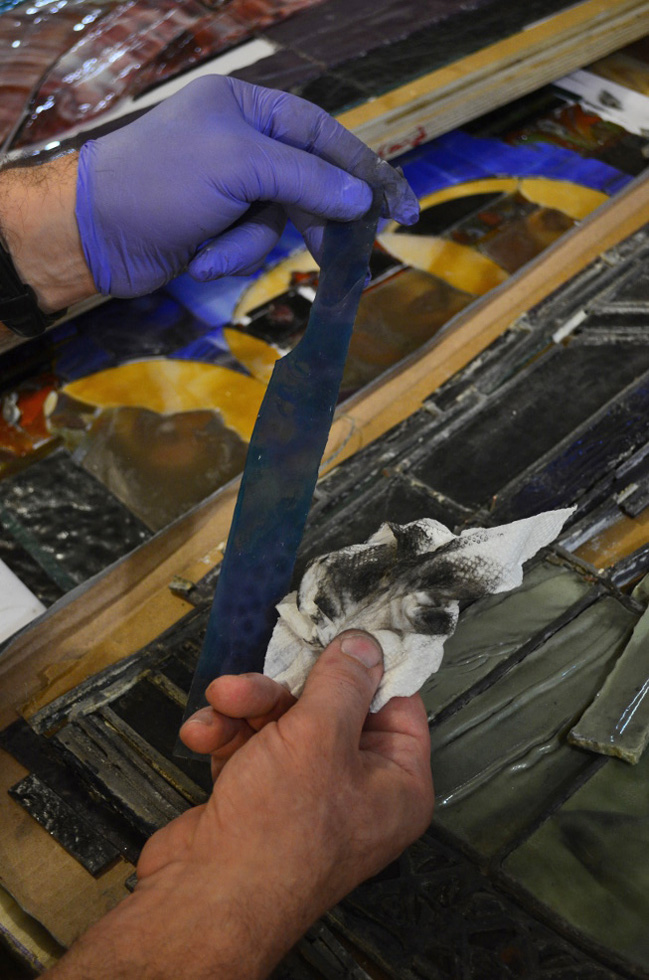 Master craftsman Marat Abramyan holds four pieces of glass that will be plated one on top of the other in the restored window. See the quantity of dirt removed from a plated face by one light pass with a towel.

The window was originally planned to occupy the opening above the altar, although within a year of its completion, Cram and Mrs. Peabody were planning a large altar reredos to cover that window opening.

Because they are constructed of two and more layers of glass set in wide-hearted, lead cames, opalescent glass windows require greater technical sophistication to fabricate and they can suffer disproportionately from the depredations of time, a polluted urban environment, and simple gravity. As with all the windows at All Saints, up to now, the Adoration window has not been properly shielded with adequate exterior protective glazing. Rather, Lexan sheets were loosely attached to the exterior profile of the window tracery in the 1970s to protect the windows from vandalism. With the exception the architects' window, the Adoration window was in the worst condition and in most need of restoration. Julie L. Sloan, in her 2011 Condition Analysis of the stained glass at All Saints', noted that this window was is in fair to poor condition throughout, the cames severely sagging, and a heavy deposit of dirt on the interior and exterior surfaces and between the plated pieces.

It was with heroic skill that the outside operations crew of the Lyn Hovey Studio was able to remove the three large lancets of this window intact. Each lancet is 26 inches wide and over eight feet tall. They are of great weight because of the two-, three-, and four-ply plating, all with severe sagging of the cames at either the top or the bottom. After arrival at the studio, each lancet, except one, was transferred to a light table for in-studio, transmitted-light photographic documentation. The structural deterioration of the central lancet was so severe that it was not possible to transfer this lancet. 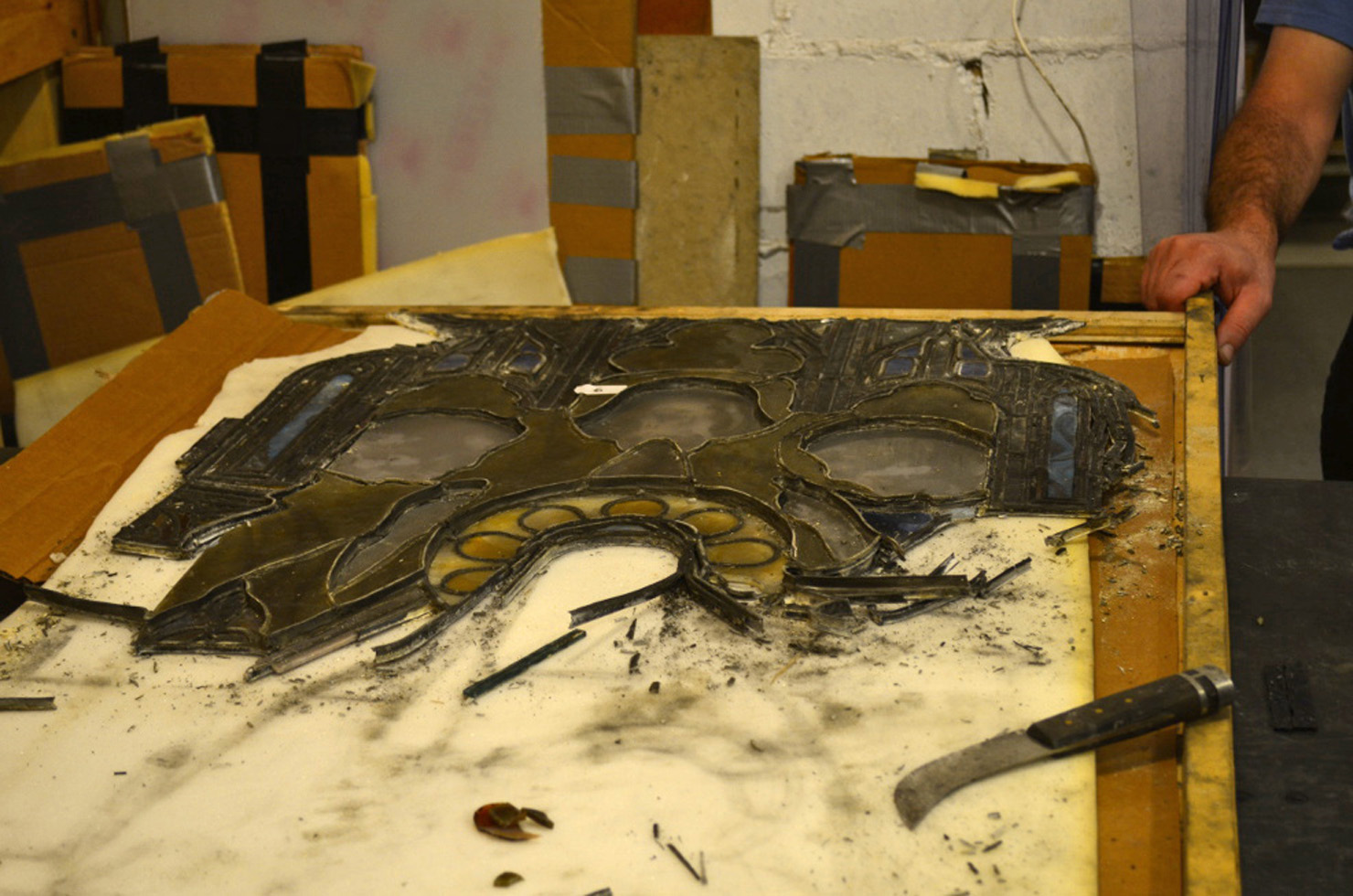 The central lancet partially disassembled, with the mother's halo and the three angels' faces and hands remaining.

Despite its deteriorated condition, The Adoration by the Kings and Shepherds is much beloved by parishioners of All Saints. It was commissioned in early 1896 by them in memory of Amelia Peabody, the two-year-old daughter of the church's patrons, Oliver and Mary Peabody. The dedication reads: "This window is given by the people of All Saints Parish to the glory of God and in tender memory of Amelia White Peabody only child of Oliver White and Mary Lothrop Peabody" with the dates of her birth and untimely death. In the left lancet, Oct 21 1864 and in the right, Aug 31 1866. The people of All Saints' never knew Amelia in life because she died before her parents ever entered the doors of the old wooden building on Dorchester Avenue. As they became acquainted with the Peabody's grief and perhaps in solidarity through their own losses, they grew confident to claim Amelia's tender memory as their own – an anamnesis. 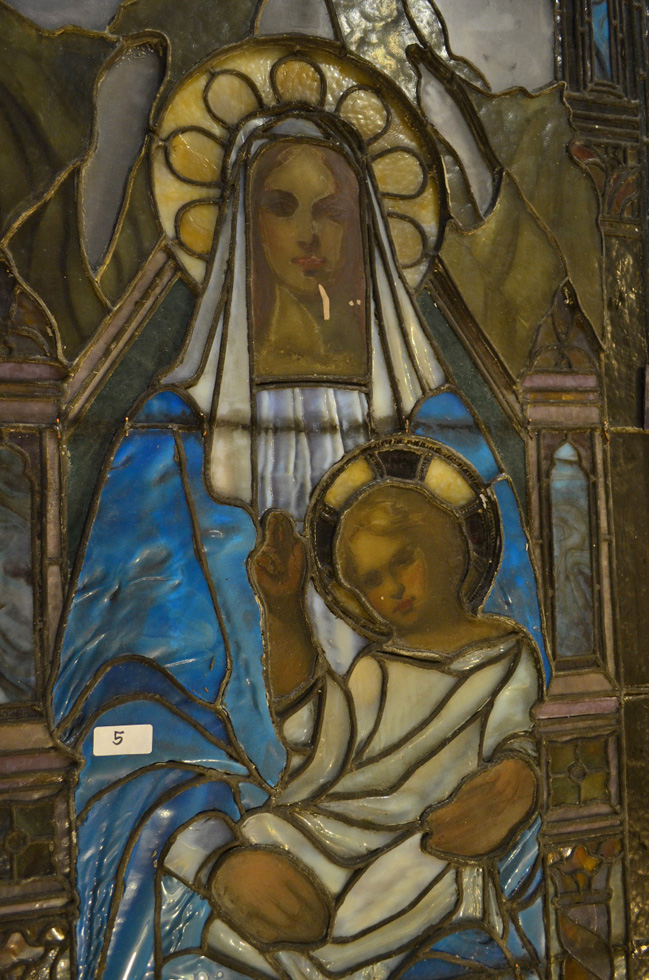 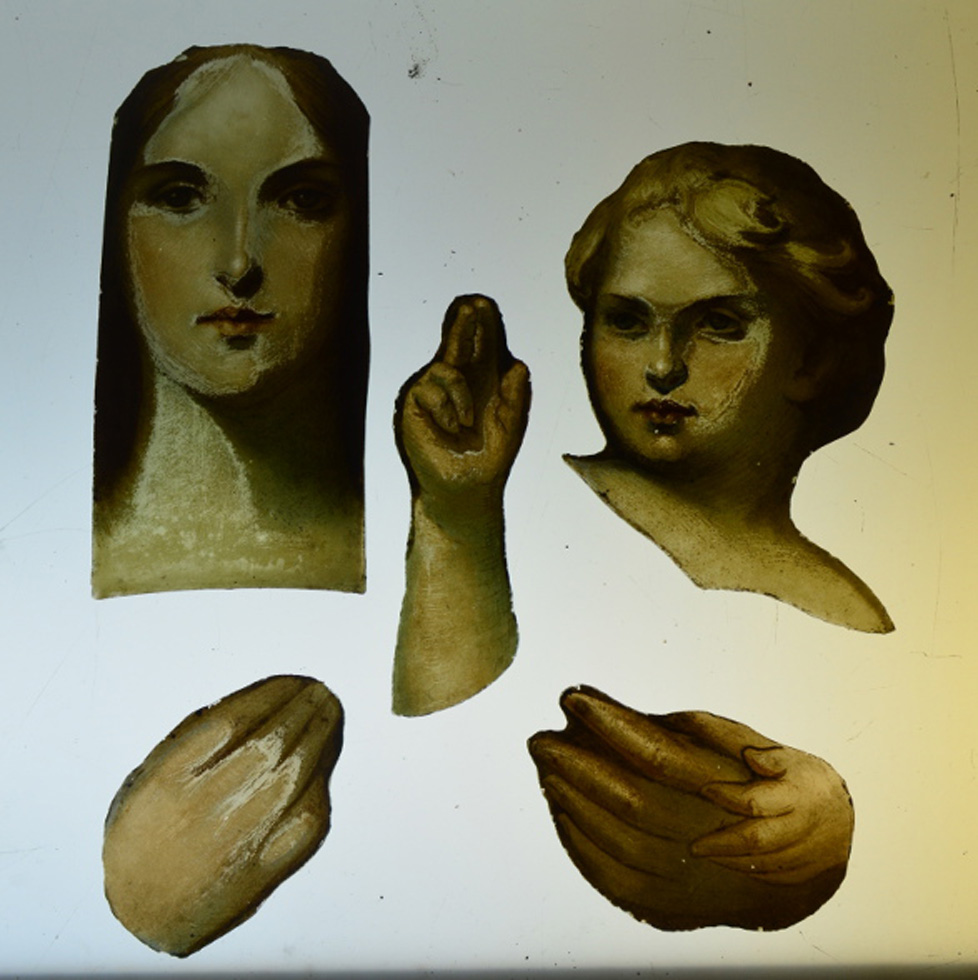 The mother and blessing child on the left. See the careless painter's drip directly across the mother's chin and neck. On the right the faces and four hands of the mother and child on a light table. 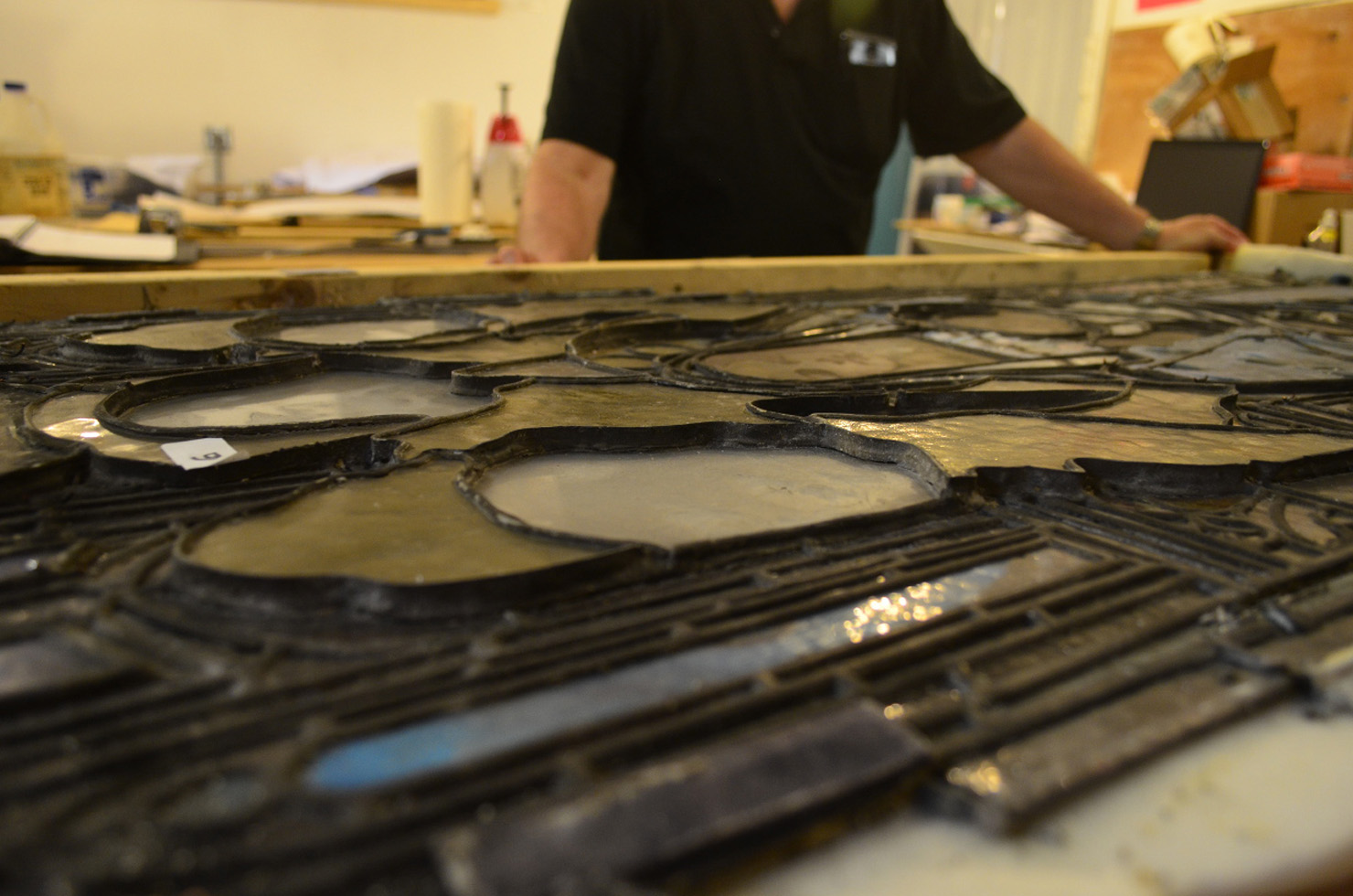 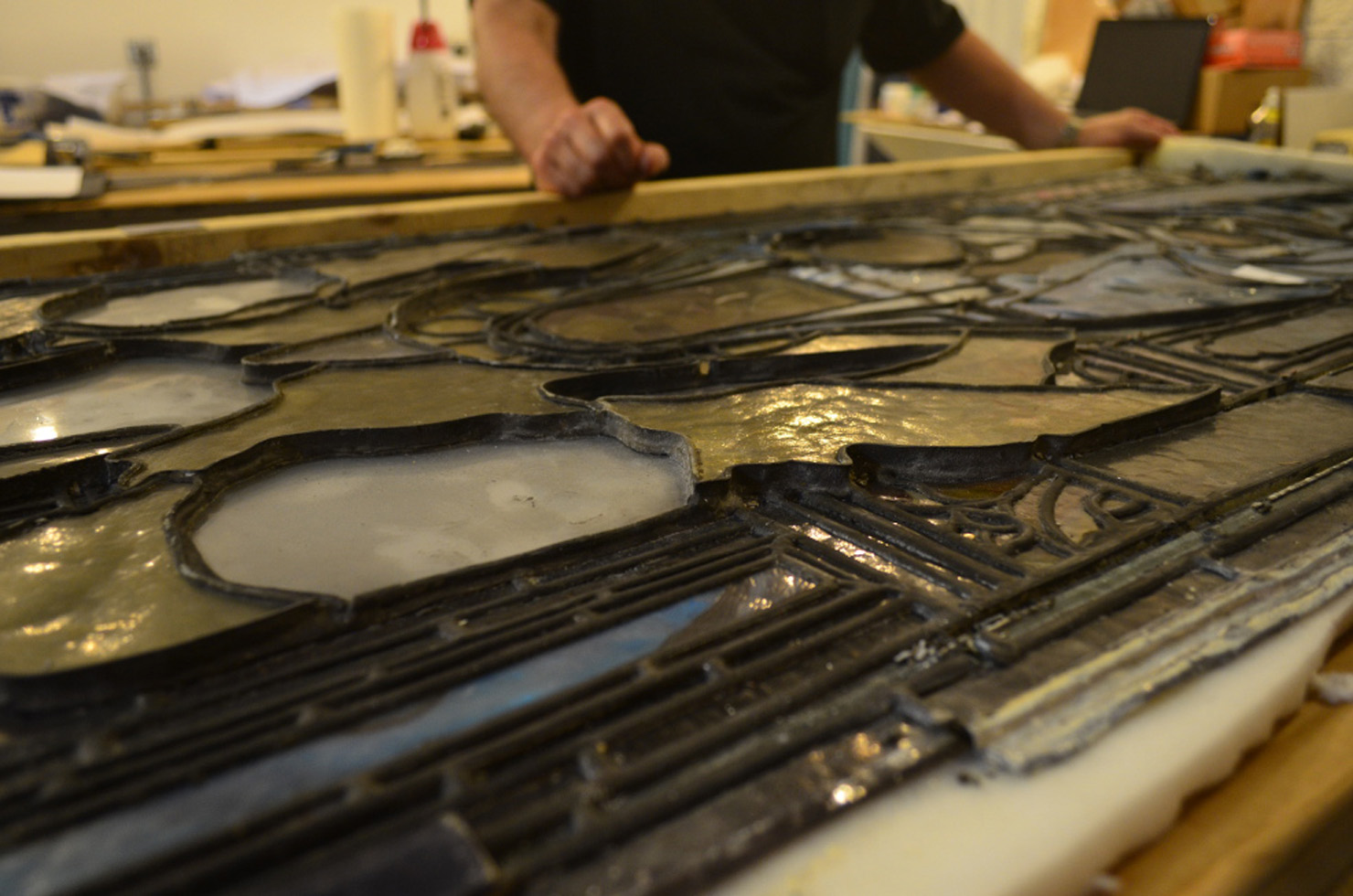 Two slightly different perspectives of the central lancet, showing the raised face of the mother and three white regions of the lower faces of the angels.

This beloved window further participates in the spiritual life of the parish week by week because it stands above and to the right to the effigy of Our Lady of Dorchester. This statue of Mary and the child Jesus, carved by Angelo Lualdi and installed in 1928, is the focus of the recitation of the Angelus, the concluding devotion at the Sunday solemn mass. Positioned where it is and brilliantly illuminated by the early afternoon sun, The Adoration by the Kings and Shepherds becomes an alternate focus of devotion for clergy, acolytes, and choir who stand along the Lady Chapel aisle. 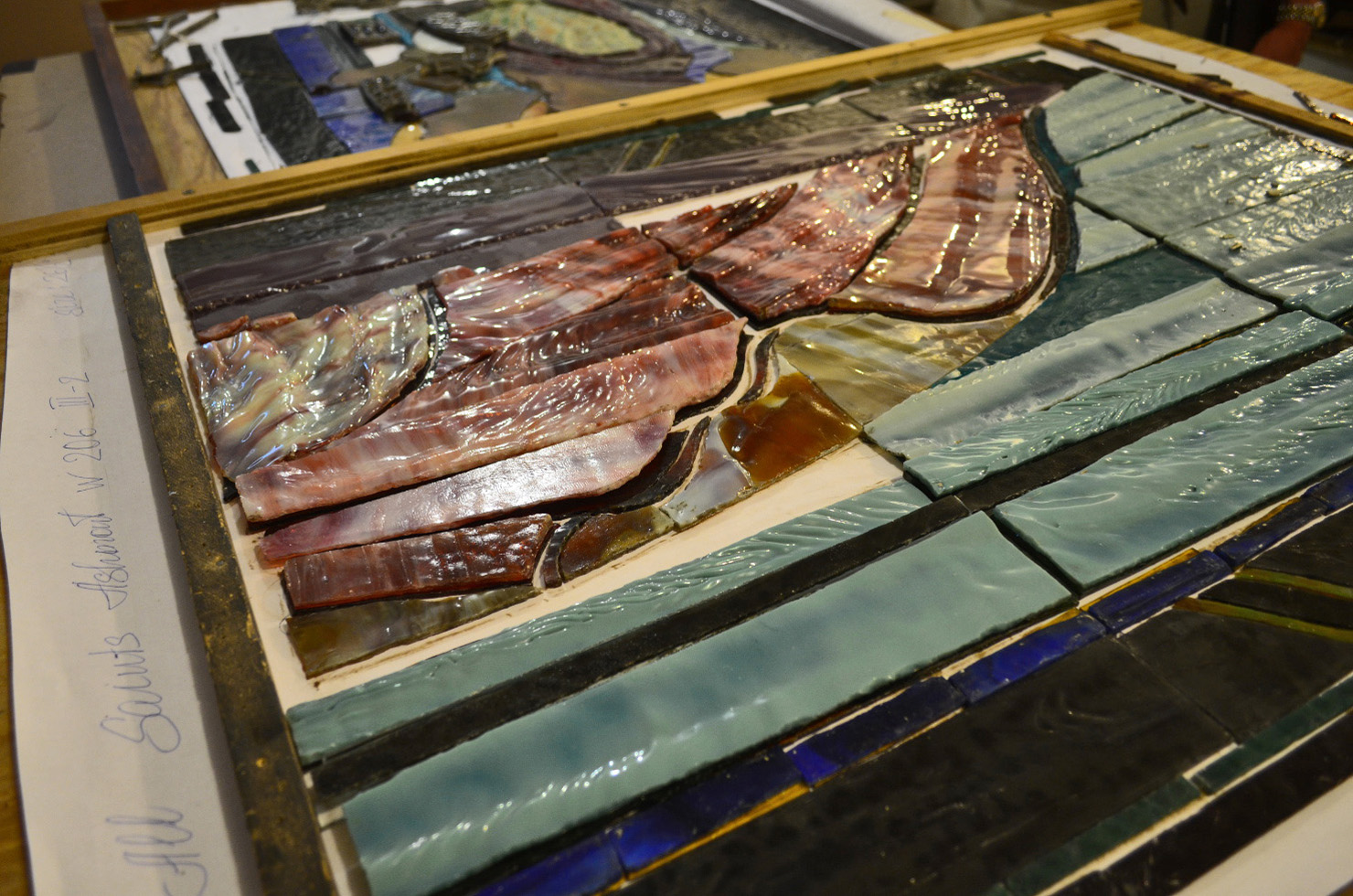 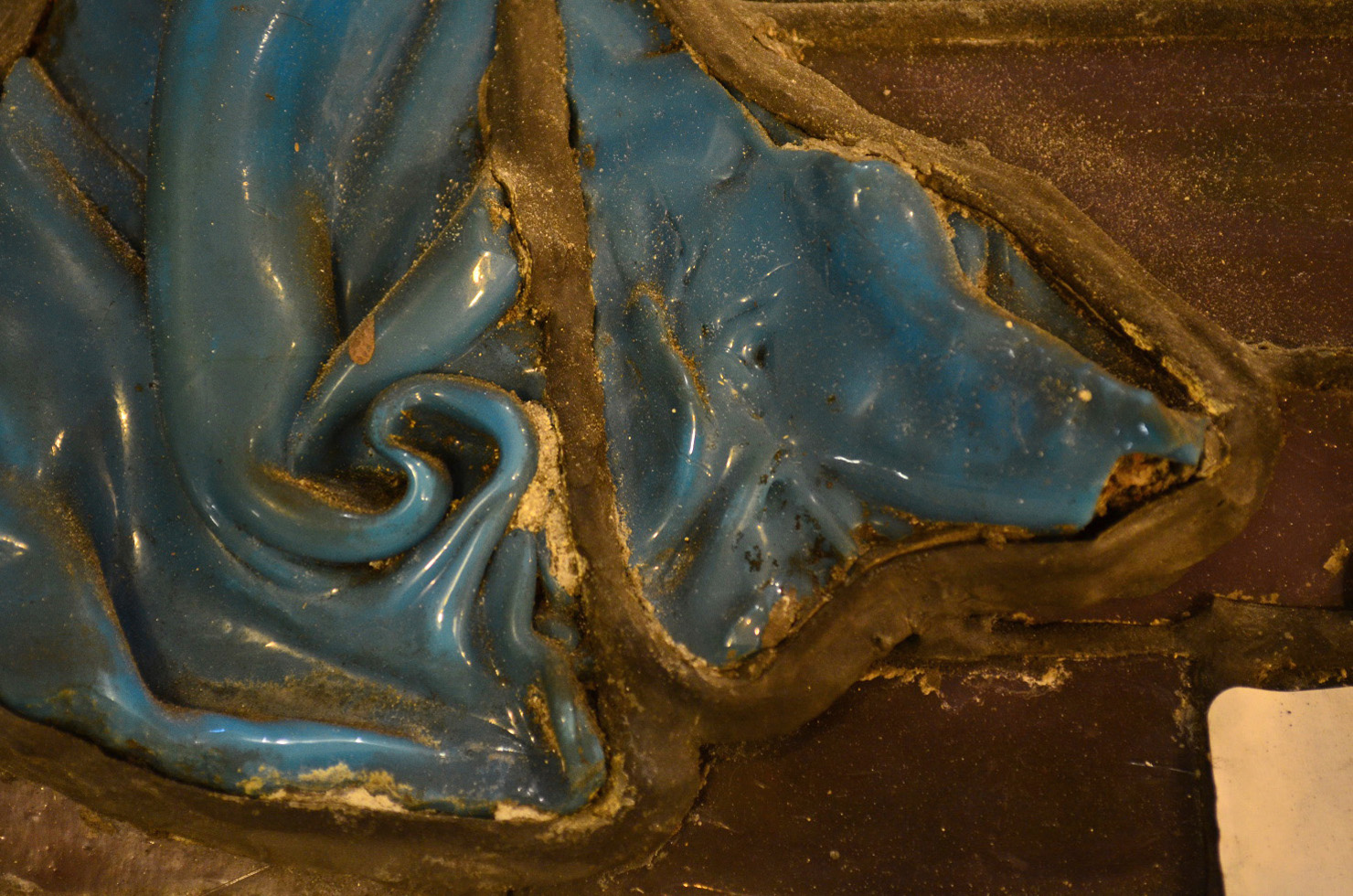 On the left, a view of drapery glass with one pink piece flipped to show the flat underside. On the right a detail view of the drapery of the bottom hem of the mother's robe.