The scaffolding begins to give way

The massive granite blocks of the All Saints' bell tower give an appearance of agelessness and permanency. It can seem as though the church will always stand ready to receive us in the time of our spiritual need, when we baptize a child, when we take a spouse, at the time of our funeral mass, and Sunday by Sunday throughout our lives. 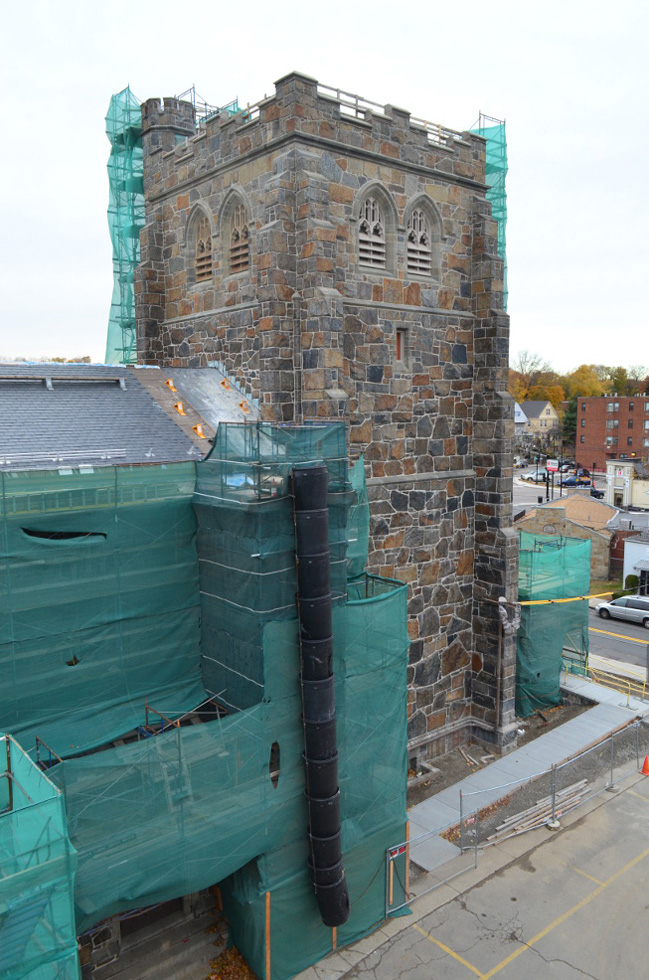 Yet, each generation must make its contribution to maintaining and improving this great material witness to the Christian Faith. By means of a providential, anonymous gift and through the efforts and gifts of many parishioners and friends, today's generation is making its own contribution.

Newly repointed bell tower from the southeast. The tracery on the south face of the tower has been stripped of old paint, while that on the east face (on the right) shows the final window tracery color. Notice the electrical service entrance cable sheathed in yellow against the green scrim in the lower right.

The parish is in the midst of renewing and improving the parish fabric and almost every aspect of the building is being addressed. The All Saints' building restoration is broken roughly into two phases, one focused on the building envelope and a second, overlapping phase focused primarily on interior work. With the favorably warm and dry autumn weather, work on the first phase is rapidly drawing to completion as the construction season also draws to a close.

The envelope of our buildings consists of a variety of roofs, a large amount of granite and brick masonry, and windows almost too numerous to count. The nave and chancel roofs have been completely reslated with all new gutters, down spouts, flashing, and snow fencing. The two aisle roofs will be reslated shortly. There will soon be four new double-lock, sheet metal roofs—flat seamed for the bell tower, narthex, and St. Stephen Chapel and standing seam for the Lady Chapel. All this work is augmented by the numerous crickets, roof ridges, wall through- and step-flashing. 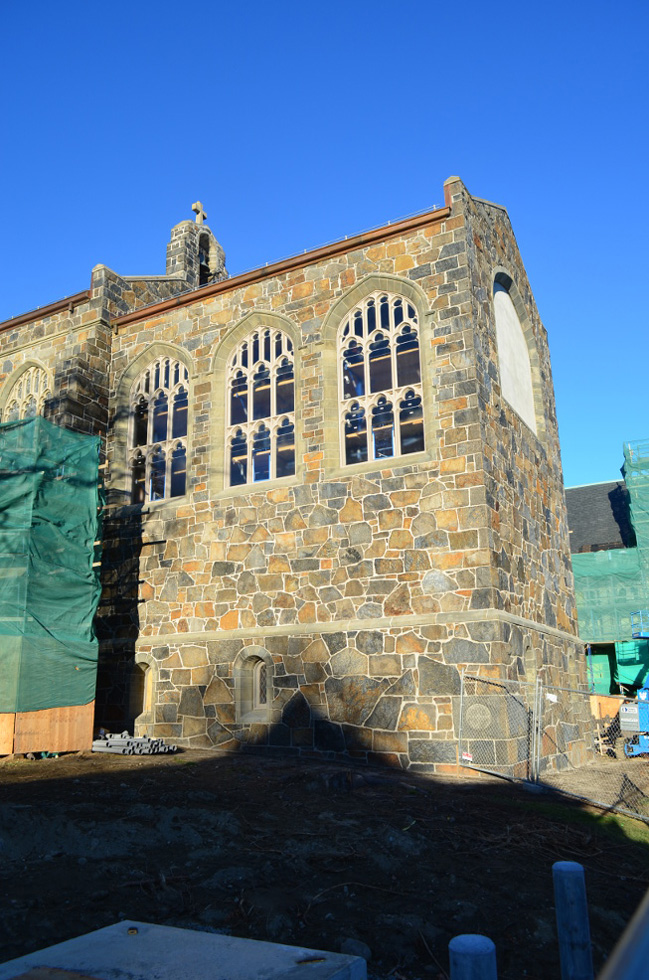 Constructed of local, Quincy, seam-face granite, the entire church and connector to the parish house have been gently washed, the mortar chiseled out, new mortar laid in, and the stone washed again. Special attention has been paid to gently wash the years of pollution and grime from the Nova Scotia and Indiana limestone used for detailing at the narthex, window surrounds, and string courses. The original mortar was tested and compared to the 1892 building specifications and a historically accurate and durable match was devised as to composition, aggregate content, and color.

The east face of the chancel in afternoon light, with the downspouts yet to be installed. The wooden planking of the interior scaffolding can be see through the permanent protective glazing. The rose-colored, diamond quarry, stained glass will be reinstalled later in the project.

The expert masons laid the mortar into the joints with care to maintain a slight relief to the face of the stone. Thirty-five tons of mortar were removed from the building and 35 tons of new mortar were applied into 46 thousand linear feet of joints. The coping stones at the chancel roof and at the bell tower were taken down and remounted with stainless steel pins to anchor them more securely to the building. In addition, seismic brackets now brace the parapet walls of the bell tower.

As grand as All Saints' may appear, it was constructed on a tight budget and compromises were made in order to remain within that budget. One of these compromises was the provision of wooden tracery, instead of stone, for most of the clerestory windows in the church nave and chancel. Only three of the four figural windows in the clerestory have stone tracery. The remaining figural window and all the diamond quarry "temporary" windows have frames and tracery of wood.

This tracery is about a foot thick and is constructed in a laminar fashion with the molded profiles facing the outside and the interior crafted from old-growth white pine backed by interior blocks of the same material. One hundred thirty years and deferred maintenance left much of the tracery in dreadful repair. A conservative approach was taken to the restoration of these window frames. When possible decayed wood was replaced with like wood in dutchman repairs. When an entire member needed to be removed, it was replaced with a piece carved from Honduran mahogany to match. Six master carpenters have restored all of the window tracery. 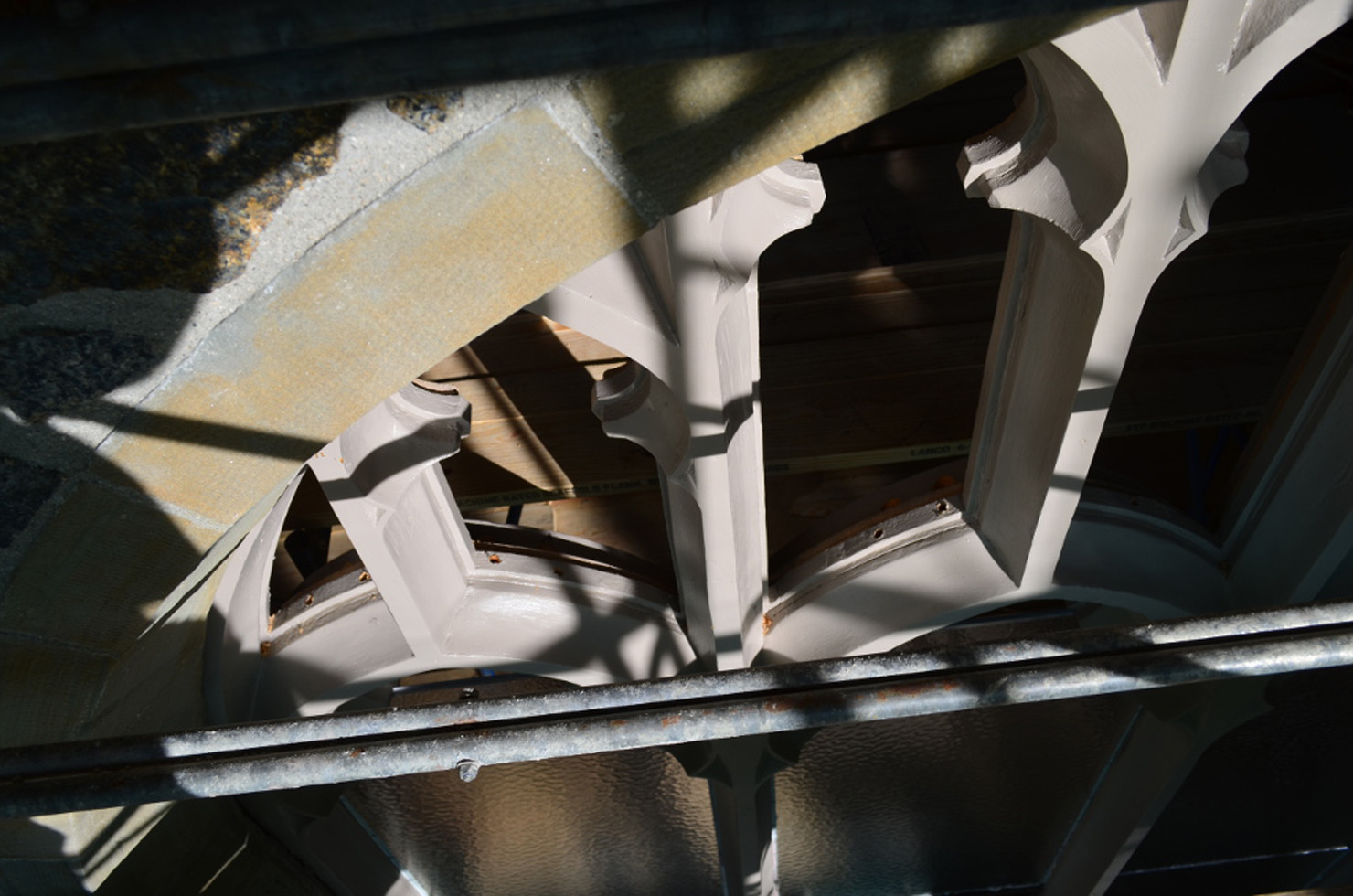 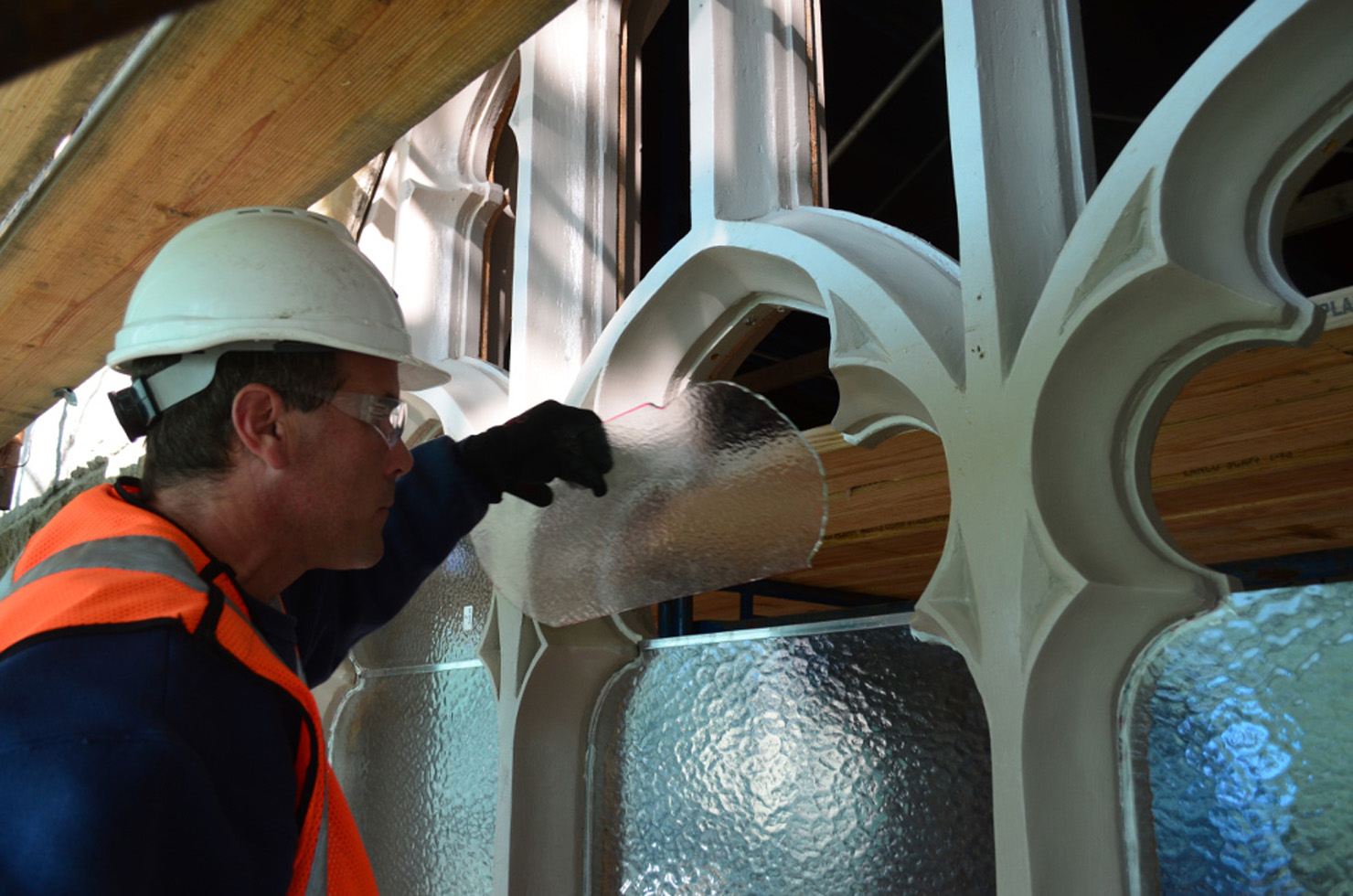 A detail of the window tracery before the protective glazing is installed. Look carefully among the shadows for the seven visible vent holes. These allow up-circulation of interior air from grilled vent holes at the bottom of the window, passing between the protective glazing and the stained glass of each window element, before exiting through grilled exit vent holes to the interior of the building. Right: A Consigli glazier fits a segment of protective glazing. A close look just above the glass being fitted reveals two holes leading up through the tracery to the bottom of the left lancet, corresponding to two vent holes in the photograph above.

Almost every window and sash is being replaced or restored. The stained glass, both figural and diamond quarry, in the church is being removed to a Dorchester studio to be taken apart, cleaned, and rebuilt with new lead cames. Where a piece of glass is so fragmented that it cannot be used, a master painter is fashioning a new piece and documenting its placement in the restored window. This careful restoration work is being carried out on each of the late-19th and early 20th century windows from such studios as Heinigke and Bowen, Phipps Slocum, Christopher Whall, Charles Connick, and Vaughn & O'Neill.

The parish house, constructed 15 years after the church, is being restored by addressing the same elements as the church. There is still service life left in the slate roof, so it is being selectively repaired with slates taken from the old roof of the church. The gutter, downspouts, and flashing are being completely replaced. As with the copper work at the church, the materials and profile match the original work.

A flaw in the detailing of the parish house buttresses has necessitated stripping the veneer brick and addressing deterioration of some of the roof trusses. The elaborate copper roof of the large, two-flue ventilator shaft has been completely reconstructed. Significant damage to the half-timbering of the parish house has been repaired and patches made to the adjacent stucco. About ten percent of the yellow brick of the exterior has been repointed. 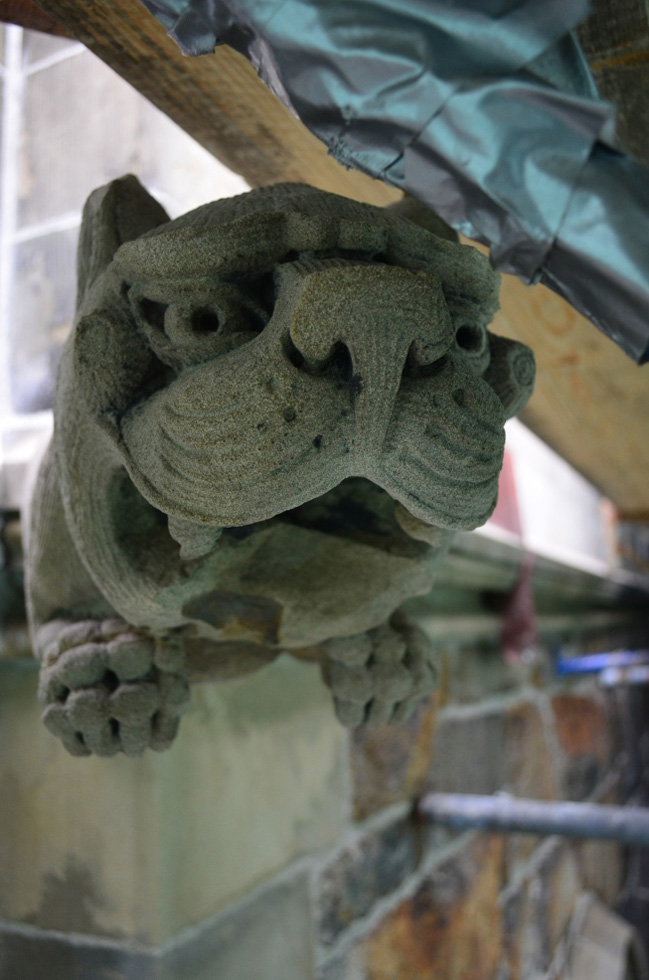 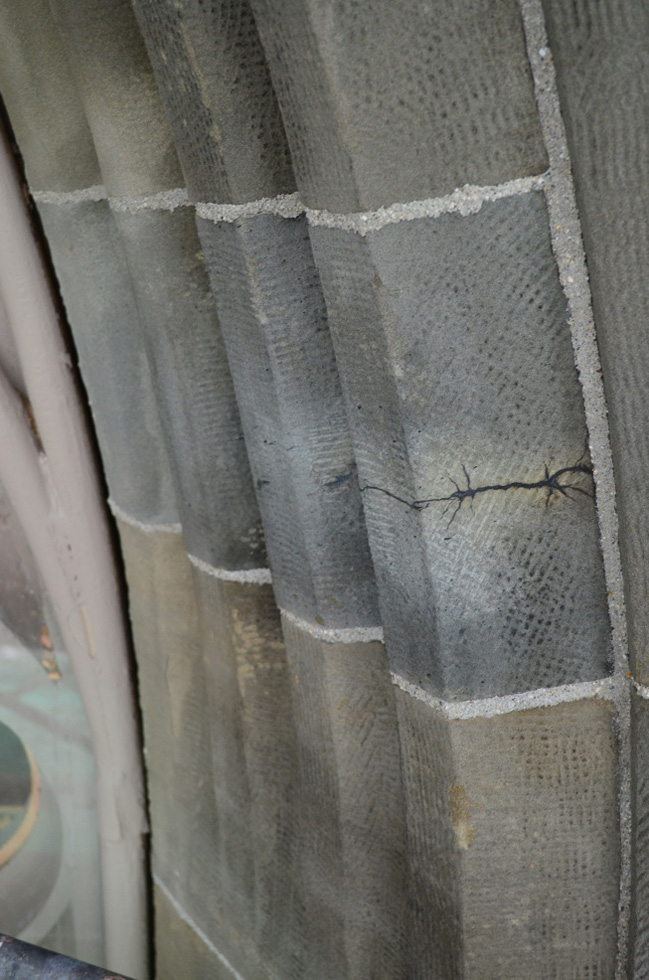 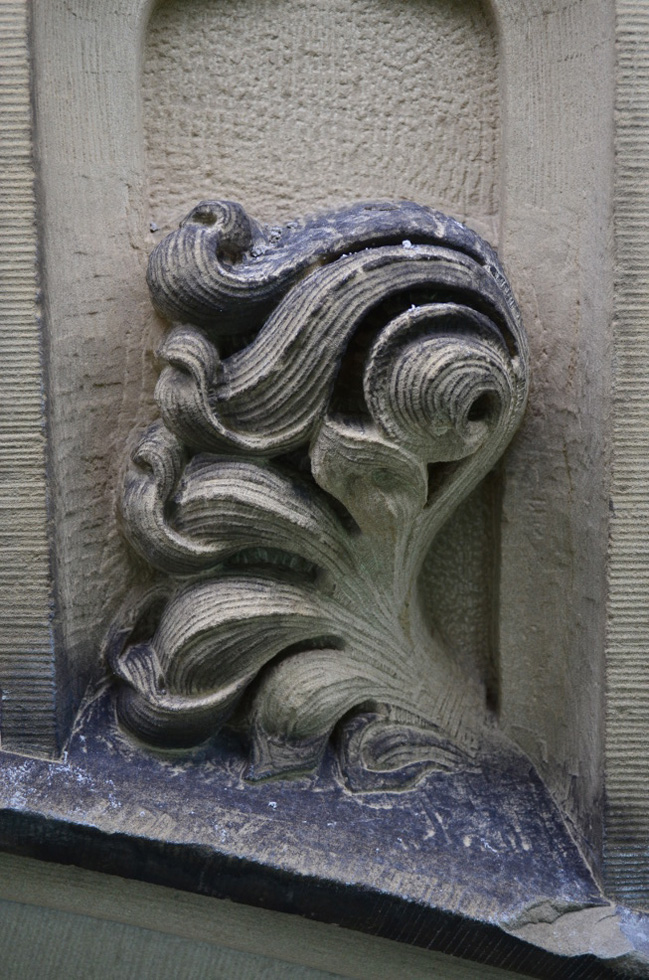 Over the years, the leaded windows in much of the parish house have been replaced with single sheets of glazing. Fabricators located in Antigua, Guatemala, are crafting new glazing for all of the fixed and operable casement and double-hung sash. Where the wooden frames can be restored they are. The metal frames are being restored and reused.

Also included in phase one are improvements for accessibility and convenience. A new, two-stage, ADA-compliant ramp has been installed so that parishioners and visitors may enter through the main door of the church at Ashmont Street. The 1980s ramp into the so-called cloister hall will be demolished. The parish has long labored with inadequate toilet facilities, and this project affords us the opportunity to build toilet rooms with twice the number of fixtures as before. The new women's and men's rooms, located in place of the old nursery, are very nearly finished. The nursery has been moved to the location of the former locker room adjacent to the gymnasium.

The north prospect of the church looking west along Ashmont Street has long been defaced by aerial electrical cables crossing the street and entering a service head atop a 20-foot length of six-inch, brown painted PVC conduit. The service entrance is being relocated underground, coming from conduits in Bushnell Street to a transformer located at the corner of Lombard Street, and then underground to the undercroft north of the St. Stephen chapel

The second phase of the building restoration is in the final stages of planning as trade-offs between cost and needed work are being evaluated. This much is certain. A significant part of phase two is the installation of an elevator and the construction of a new stair hall to replace the original one.

As anyone who has had to go from the first-floor lower hall to the second-floor Peabody Hall knows, this means entering a weird M.C. Escher-like stair hall where one has to descend a half-flight of stairs before immediately ascending a flight and a half of steps. The parish investigated the problem of the stair hall several times over the 20th century without finding a suitable solution that remained within the original footprint.

The present building project offers the opportunity to rectify the situation by going outside the existing footprint to build a small addition that will house a five-stop, two-door elevator. This addition, positioned north of the cloister, approximately twenty by seventeen feet and architecturally matching the slate, stucco, and half-timbering of the parish house, will afford a gracious new entry to the parish house and cloister. This elevator will make all of the major public areas of the church property accessible. A lift will be installed to provide access to the gymnasium. 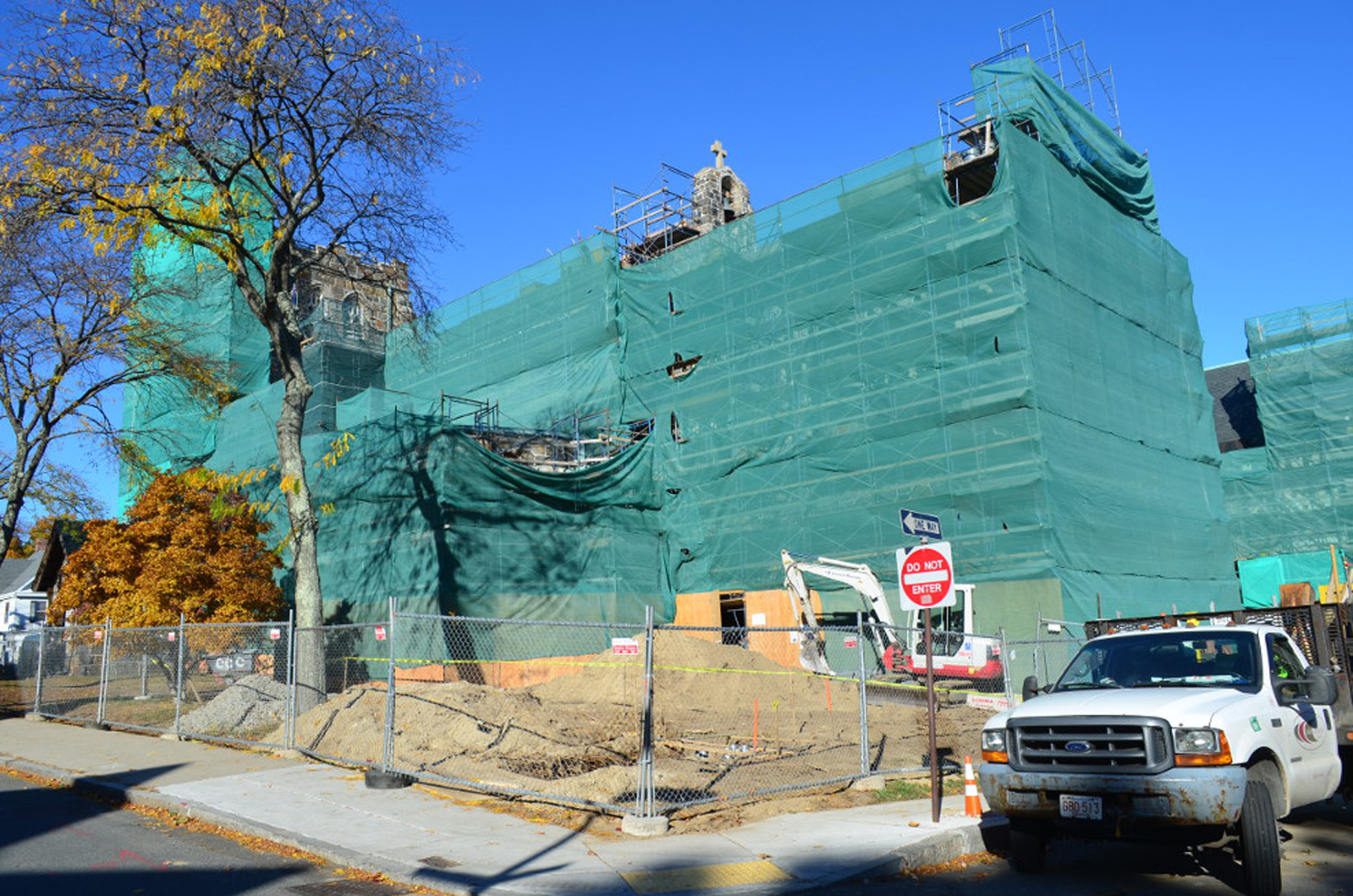 The construction site viewed from the southwest. The construction fencing encloses the excavation for the new electrical entrance. The transformer will be located to the left of the stop sign. The trenching will parallel the chancel, entering the undercroft to the switch gear just north of the St. Stephen chapel.

In addition, the existing restrooms will be renovated and the existing sprinkler system in the parish house will be extended to protect the church, too. The parking lot will be reconfigured and enlarged by three percent to improve vehicular circulation and pedestrian safety, adding three parking spaces in the process. A subsurface infiltration system will be installed for on-site management of storm water from the roofs and parking lot.

The entire project is scheduled to be completed by the end of 2014.

High resolution files of images used in this article. Click any image to enlarge.