As our program year draws to a close, I want to update you all on some building matters since I last addressed this subject in the fall.

Most immediately obvious to all was the water leak onto the Fisk organ in January.  Those arriving for Sunday’s Masses on the fourteenth found the organ at the back of the church once again encased in protective plastic, just as it had been during the building renovations.

This time, however, it was to protect the instrument from water rather than dust. We were most fortunate that workmen were here that day working on the tower roof (unrelated repairs to the leaks as we discovered).  They heard a few drops of water and investigated. We were even more blessed in that professional help was able to come almost immediately. The water in the instrument was removed, fans set up to provide air circulation and drying, and the organ covered to protect it against further water infiltration.  This work required the removal of more than 300 pipes. The next week C.B. Fisk (the builders of the organ) came to evaluate the damage. We were incredibly fortunate to learn that there was much less damage than feared. Amazingly a day of repair work and another day of tuning the pipes which had been removed has put all things to rights.  The early discovery and quick response was crucial to this outcome.

Of course, the source of the leaking which damaged the organ needed to be addressed.  Investigation showed that the floor of the belfry had developed leaks. This floor needs to function as a roof as well, since the large louvered arches need to be open to the elements for the bells to be heard.  Rain and snow can be blown in. Furthermore, the floor had settled some due to the weight of the massive wood frame and the eleven bells which are mounted on it. The result was that the drain in that floor was no longer at the low point, allowing a considerable amount of water to pool.  Some small cracks in the solder joints of that floor allowed water to enter. The problem was made more severe by the severe blizzard which we experienced at the start of the year: its very strong winds drove large amounts of snow through the louvers into the belfry. When we finally got some warmer weather, that snow melted, pooled on the floor, and ultimately leaked into the building.  That situation has been remedied by installing two new drains in the floor at the new low points to prevent water pooling. Soldering cracks have been resoldered. The flashing was restored and new was added around the bell-frame. The entire floor was then treated with multiple coats of a silicon roofing product generally used for commercial and industrial flat roofs.

Completing the building restoration punch list has not proceeded as we hoped it would.  There was some work done during the fall and winter, but nowhere near the progress needed to close out the project.  In March the parish asked for a meeting with the co-owner and CEO of Consigli Construction Company. On Maundy Thursday we met with Anthony Consigli and the Project Executive.  Also at that meeting were our project architects (including John G. Waite, the head of that firm), our owner’s representative, three members of our building committee, and myself.  Our conversation was what you might call fair and frank. We were able to communicate to Consigli our frustration concerning the as yet unfinished work as well as the discovered problems with completed work such as the roof leaks.  We also expressed concerns about the costs to the parish in manpower, the impact on our use of the facility, and our inability to fulfill our responsibilities for final reports and a financial accounting of the project to the generous foundations which awarded us grants.  (Over the course of this project I have become adept at inspecting for problems and documenting their occurrence as well as the conditions which gave rise to them – but let me just say that a career in building management was not quite what I anticipated when I was ordained.)

Our concerns were heard and there has been significant movement since that meeting.  Additional staff has been assigned to our project. Flood tests were performed on the tower roof, identifying the sources for some of the leaks we’re experiencing.  Those identified have now been repaired. There have been particularly difficult problems with the drains at the corners of the St. Mary’s roof (as witness the paint and plaster damage behind St. Joseph).  The solder joints of those drains continued to break, allowing water to enter the walls. A new drain design has been developed which eliminated that weak spot by recessing the drain into the roof. We are optimistic that this will in fact solve the problem.  We are still searching for other sources of some water intrusion, such as that experienced in the St. Mary’s aisle.

The heating system is the other major outstanding area.  The new HVAC contractor which was brought on last year has done considerable work getting the hardware of the system up to specification.  Unfortunately the same can not be said for the controls, the computerized system which operates the boilers, valves, and pumps to achieve the temperatures and schedule we set.  We have continued to experience both boiler shut-downs and zones not reaching temperature by the scheduled time or, in some zones, at all. As a result of our Maundy Thursday meeting a new controls subcontractor is on the job.  After almost four complete heating seasons, we had no confidence that the former subcontractor could perform the work satisfactorily; it is early days, but we are hopeful about the new subcontractor’s prospects. Though, of course with our history of non-performance, we will want to verify the system’s adequate performance in actual cold weather conditions before we consider the problem fixed.

Lastly – and much more positively – let me call your attention to the new signs for All Saints.  The replacement of the old church sign was intended to be part of the restoration project. Our construction manager was dissatisfied with the sub-contractor and questioned their ability to execute the design with the quality we wanted and in the time-frame needed.  As this was very close to demobilization, Consigli suggested that it might be best to drop the sign from the project and (with greater time to locate a suitable contractor) do it ourselves at a later date. Eventually we were able to find such a contractor. We worked some months with him on the design, adding a second sign for the Parish House to the project.  Many people come for concerts or various public meetings hosted here, or are simply not familiar with our building. Providing exterior identification for the Parish House, Peabody Hall and the offices seemed a wise and hospitable thing to do. The new signs were installed the last week of April – and have met with overwhelming approval. They are beautifully carved, with incised lettering in gold leaf.  The parish shield is rendered in color at the top. The design subtly references the building, both in its colors as well as the echo of the arches. The new church sign is two sided, so that it can be read easily by those driving by or walking. The old sign was set back further and was one sided, facing Ashmont Street. Few passing by would notice it much less read it. There are interchangeable panels for the service times so that we can announce our Christmas and Holy Week services.  All in all, a wonderful solution to the crying need for a more fitting public identification of who we are. 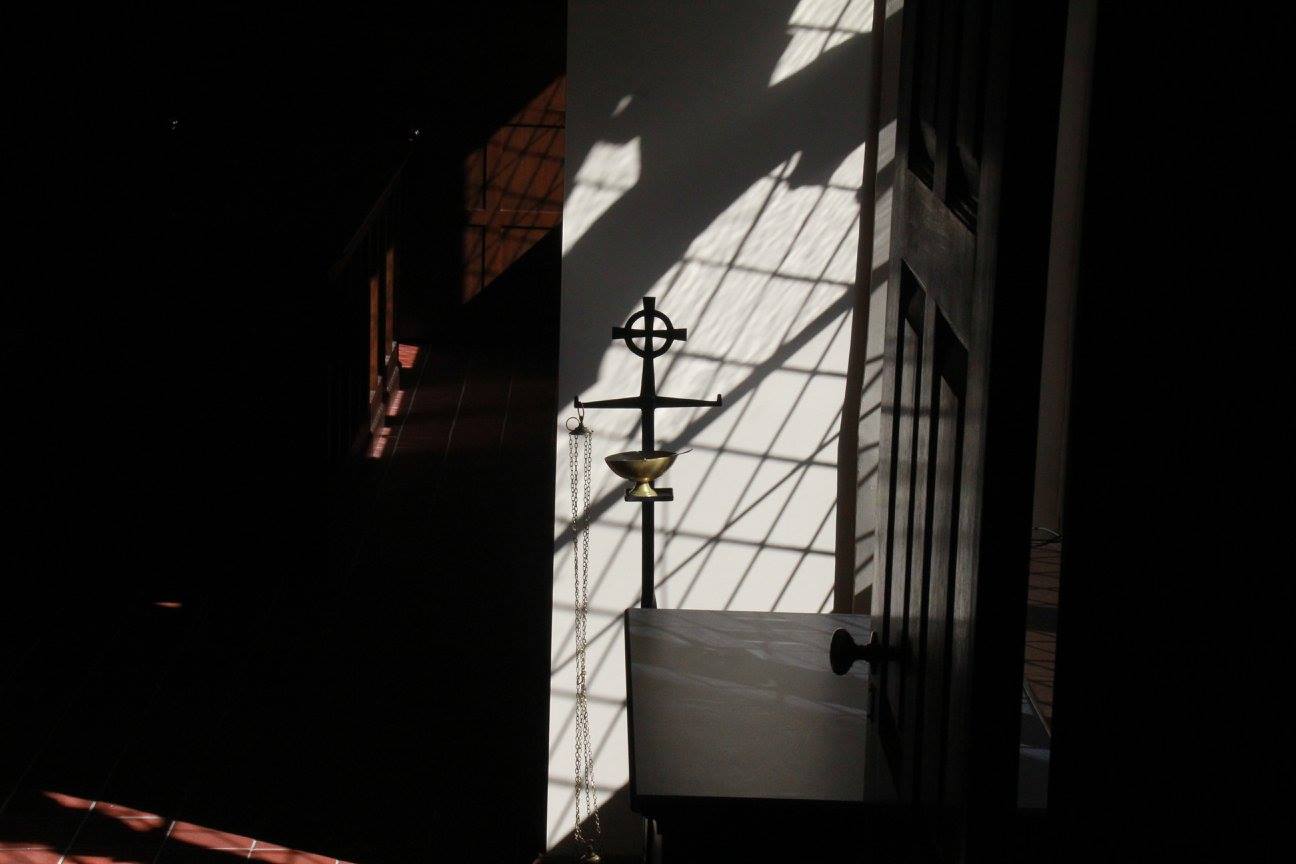